Days of Our Lives Spoilers & Recap Friday, May 31: Jack Has A Memory – Will’s Condition Worsens 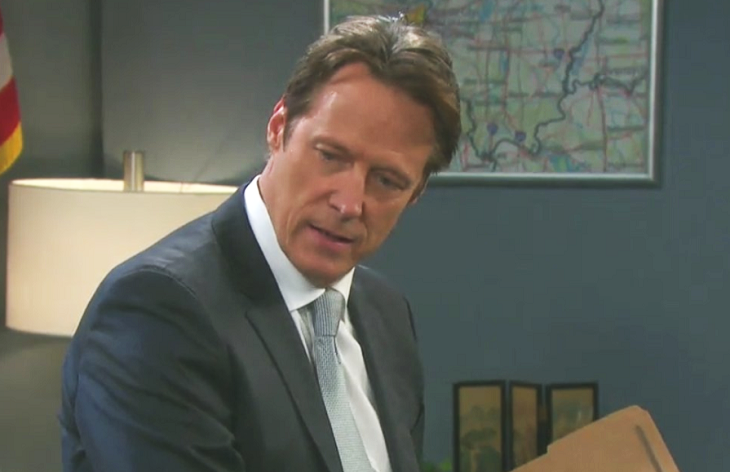 Days of Our Lives (DOOL) recap Friday, May 31, 2019, reveals Eve Deveraux (Kassie DePaiva) tells Xander Cook (Paul Telfer) that she needs Dr. Rolf’s ( William Utay) diary back. Xander tells Eve that Jack will use it to get his memory back. Eve promises to make sure Jack never sees the diary.

Eve says they need Rolf’s formula to cure Will Horton’s (Chandler Massey) tumor. Xander refuses to give Eve the diary back. Xander tells Eve he doesn’t care about Will or Sonny Kiriakis (Freddie Smith). Xander tells Eve they won’t just use the journal to save Will and asks if she ready to lose Jack Deveraux (Matthew Ashford).

Xander tells Eve if Jack finds out about the serum, he will want it. Eve says Xander is going to give her the diary and she can make a statement that a concerned citizen dropped it off. He tells Eve she isn’t getting the diary. Eve threatens to use her position to come after Xander. Jack walks in and catches Eve talking to Xander and demands to know why.

Days Of Our Lives Spoilers – Where Is JJ Deveraux?

Eve claims to have just learned what Jennifer did to him. Xander says he is congratulating Eve. Jack asks Eve is something is wrong when Xander leaves. Eve says something is very wrong. Eve tells Jack she’s been thinking about Will. Eve informs Jack the Will has a brain tumor. Xander pulls out the diary and says Will is on his own.

Days of Our Lives Jack threatens to charge Jennifer Horton (Melissa Reeves) with assault and send her to prison. Jack brings up Jennifer being at a prison in a guard uniform in the past. Jennifer asks what he said. Jack tells Jennifer to stop messing with his head.

Jennifer tells Jack that he was in prison, and she visited him in a guards uniform. Jennifer tells Jack he is getting his memory back where he wants to or not. Jack demands to know where J.J. Deveraux (Casey Moss) is Jennifer claims not to remember. Jack get the guard to take Jennifer to lock up.

Days of Our Lives Brady Black (Eric Martsolf) calls the police to get someone to look for Maggie Horton (Suzanne Rogers). Maggie jumps onto Brady for worrying about her. Maggie wants Brady to get off her back. Brady can’t believe the Maggie threw him under the bus to cover her drinking. Maggie apologizes to Brady and tells him about her visit with Kate Roberts (Lauren Koslow).

Days of Our Lives Kristen Dimera (Stacy Haiduk) talks to her Nicole Walker (Arianne Zucker) mask. Kristen hates having to be Nicole to get Brady. Eric Brady (Greg Vaughan) shows up at Kristen’s door wanting to speak to Nicole. Eric demands to be let into the room, Kristen refuses. Eric tells “Nicole” that Xander is up to something and he knows what it is. Eric tells Nicole that Rex Brady (Kyle Lowder) found Xander in the morgue at the hospital and about his lies.

Days Of Our Lives Spoilers – Will Horton Passes Out

Eric sees champagne and can’t believe Nicole is drinking it today of all days. Nicole claims to have toasted Holly Jonas (Harlow and Scarlett Mallory). Eric wants to know what Nicole was laughing about; she says Xander is trying to get into Victor Kiriakis’ (John Aniston) good graces.

Nicole tells Eric sometimes she thinks this is a bad dream. Eric tries to comfort Nicole, and she blames him for Holly’s death. Nicole tells Eric she hates him, Brady hears Eric and Nicole arguing from outside the door. Nicole breaks away from Eric and falls just as Brady breaks down the door and demands to know what he has done.

Days of Our Lives Will joins Sonny in the living room. Will tells Sonny he went to check on Ari Horton (Harper and Sydnee Udell). Will thinks he is being punished for bringing a child into the world with Gabi Hernandez (Camila Banus). Sonny tries to reassure Will that everything will be ok and Will will be there to raise Ari. Will tells Sonny he has a brain freeze from ice cream and then falls to the floor.

Sonny calls an ambulance to get Will to the hospital. Kayla Johnson (Mary Beth Evans) needs to do tests on Will, but she thinks the tumor is causing his problems. Kayla says the tumor is continuing to grow. Kayla says if they don’t stop the growth, it will kill him. Kayla says Will could die in a matter of days.

Young And The Restless Spoilers & Recap Friday, May 31: Adam Gets News – Nate And Abby Go On Date – Devon Sees Hilary