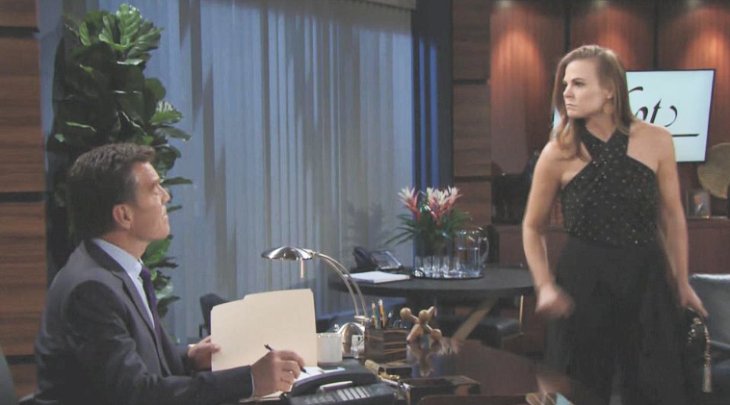 The Young and the Restless spoilers tease that Phyllis Summers (Gina Tognoni) will be a woman with a plan. She’s just scored a huge sum of money from Billy Abbott (Jason Thompson), and she’s putting it to good use.

As Y&R viewers know, Phyllis is planning on starting a new online accessories company and she’s hitting the ground running.

But it takes a considerable amount of resources to make a virtual business a success, and Phyllis will find herself wanting a partner. That’s where Jack Abbott (Peter Bergman) will come in.

Young And The Restless Spoilers – Phyllis Summers Wants In

According to Y&R spoilers, Phyllis will approach Jack with a big idea. She’ll want her accessories company to become a part of the new Jabot Collective that Jack’s working on.

It would be a huge boon for Phyllis’ fledgling company if it were able to partner with Jabot, and Phyllis knows it. She’ll pitch the idea to Jack, but Y&R spoilers say that she’ll be in for a big disappointment.

Jack will promptly nix the idea, as he won’t want Phyllis anywhere near Jabot after what went down previously with Kerry Johnson, aka Dominique Carroll (Alice Hunter).

Phyllis will be disappointed and embarrassed by Jack’s rejection, but she won’t be deterred. Y&R viewers will remember that Phyllis strongly encouraged Summer Abbott (Hunter King) to remain at Jabot, and that will come in handy now. Y&R spoilers say that Phyllis will finagle her way into the Jabot servers using Summer’s credentials.

Phyllis won’t know exactly what she’s looking for, but she’ll have her eyes open for anything that might help give her new company an edge or a boost. We’ll see what, if anything, she finds, but if this is any indication of how Phyllis will be operating in the future, it looks like she’ll willing to do anything to make her new company succeed.

Of course, Phyllis tends to always land on her feet, so we’re willing to bet that she’ll find something on the Jabot servers that will help her down the line. What do you think Phyllis will find?

Stay tuned to the CBS soap and don’t forget to check Soap Opera Spy often for the latest Young and the Restless spoilers, updates, and news.