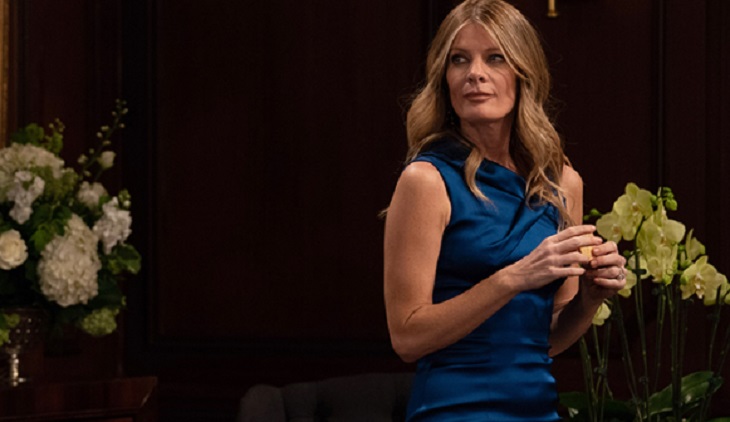 The Young and the Restless (Y&R) spoilers tease that Phyllis Abbott (Michelle Stafford) will find out that Kevin Fisher (Greg Rikaart) kidnapped her and she will want him to pay for stashing her in that basement closet. She will force him to reveal why he kidnapped her, which will lead her straight to the truth about Chloe Mitchell (Elizabeth Hendrickson).

On Monday, July 1, Phyllis will figure out that Kevin was the one who kidnapped her. She comes to this conclusion after he helps her crack a code on Dark Horse’s website and she smells his cologne.

Phyllis grabs him and demands he tell her why he kidnapped her. She will say that she thought they were cool but now she isn’t sure. Kevin tries to deny it, but the Y&R spoilers say that he will have no other choice but to come clean.

Young and the Restless spoilers tease that Kevin tells Phyllis that he is only in Genoa City for a short visit as he is helping someone with a problem. She tries to get him to give her a name, but he refuses to expose Adam Newman (Mark Grossman) as his blackmailer.

While Kevin was able to fend Phyllis off on Monday’s show, the Y&R spoilers say it won’t be that easy later in the week. She will want to know why he’s sticking around. She cannot imagine what would keep him away from his daughter.

Eventually, Kevin will come clean. He will tell her that he thought she and Adam were a couple and so he kidnapped her to get something from Adam that he needed. Y&R spoilers tease that won’t be enough information for him, as he will want to know what info that Adam could possibly have on him that he could use against him?

Backed against a wall, Kevin will blurt out that Chloe is alive. Victor Newman (Eric Braeden) helped her fake her death so she could escape GC and the impending murder charge for supposedly blowing Adam to pieces in the cabin blast. As it turns out, he made it out alive.

The real question here is what will Phyllis do with this little piece of information. Will she leverage it against Kevin and blackmail him too, or will she team up with him to fight off Adam? We’ll have to wait to see how it all pans out over the next few weeks.