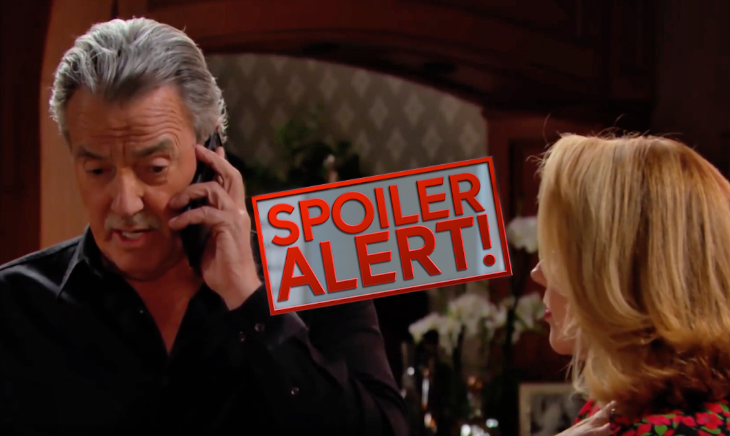 “Young and the Restless” spoilers for Monday, January 28, tease that Victor Newman (Eric Braeden) will get some unpleasant news. At the ranch, Abby Newman (Melissa Ordway) brings Arturo Rosales (Jason Canela) over so they can reveal their engagement. Victor quickly voices his displeasure and pushes Arturo to sign a prenup. Abby is miffed at Victor’s treatment of Arturo, but her new fiancé assures her he’s OK with the signing.

Afterward, Victor reads a story to Johnny Abbott (Holden and Ryan Hare) while Katie Abbott (Sienna Mercuri) plays in the floor. When Victor’s done with the story, he looks up to find that Katie is gone. Katie is eventually found upstairs. She talks about playing with a special friend, but Victor doesn’t see anyone else in the house.

The fab four promise Nick that they hated lying about this mess. They were just trying to protect themselves and honor their pact. Nikki still thinks Phyllis is the person who set up J.T., but Nick just can’t buy that. He ends up taking off with Victoria to attend an engagement dinner for Abby and Arturo.

That leaves the rest of the girls’ night gang to bicker. Sharon is forced to play peacemaker for Nikki and Phyllis. She worries they’ll all land in prison if they won’t focus on being a team. Phyllis admits that’s true. She’s also concerned now this secret is spreading. It’s not a good idea to have too many people in their inner circle.

At the Abbott mansion, Jack Abbott (Peter Bergman) throws an engagement party for Arturo and Abby. Arturo decides to invite Rey Rosales (Jordi Vilasuso), who tells Mia Rosales (Noemi Gonzalez) their new dinner plans. Mia pouts since Arturo stole the show at the vow renewal. She’s not interested in sitting through this meal, but Rey talks her into it.

Do you think Jack should trust Kerry? #YR pic.twitter.com/buE1rrwGhC

Jack’s reluctant to invite Kerry Johnson (Alice Hunter) at first, but Billy Abbott (Jason Thompson) nudges him toward the decision. Unfortunately, Kerry’s distracted with texts and calls. Jack seems wary and eventually, he spots the syringe in Kerry’s handbag.

Mia also makes a drunken scene after way too much wine. She makes sarcastic comments and hurls insults until Rey finally leads her away from the gathering. Abby later takes Arturo aside and delivers a warning. She thinks Arturo needs to have a little chat with his ex or else she’s going to do it for him.

Jack demands the truth from Kerry today on #YR. pic.twitter.com/gNKDM4D7XA

At home, Rey and Mia get into an argument about his brother. Mia whines about Abby setting Arturo up for heartbreak, but Rey isn’t worried about it. He feels confident Arturo can deal with his own drama.

“The Young and the Restless” spoilers say more romantic conflict is brewing, so don’t miss the shockers and shakeups ahead. We’ll give you updates as other Y&R details and rumors emerge. Stay tuned to see what’s next in Genoa City.