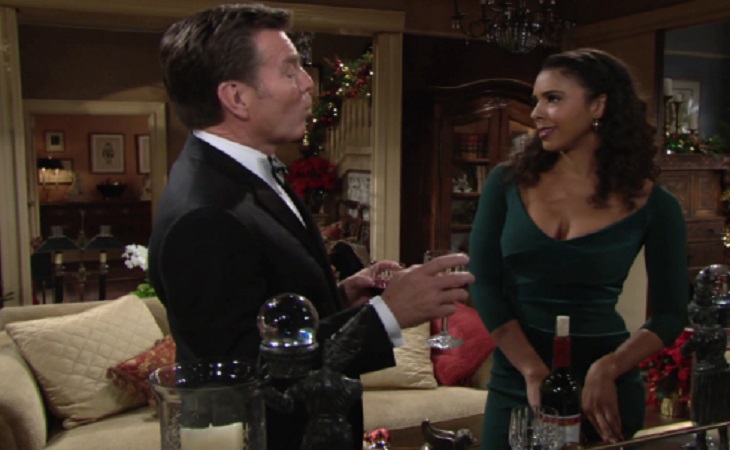 The Young and the Restless spoilers tease that Jack’s (Peter Bergman) familiarity with addiction could prove useful in the very near future. Kerry’s (Alice Hunter) possession of a needle could indicate that she’s an addict.

Miss Johnson, like nearly every soap character who’s debuted on Y&R through the years, has an intriguing backstory. But what is it?

Kerry’s recruitment by Jabot, through Phyllis (Gina Tognoni), became necessary when Ashley (Eileen Davidson) flew off to Paris, France. The cosmetics leader needed a skilled chemist and Miss Johnson is that.

Having battled Jackie for months about Dina (Marla Adams) and control of Jabot, Davidson’s legacy character had enough. After gaining knowledge of owning most of the family company’s patents, Ashley took them overseas where, like Dina had done before her, she hoped to make her own business world mark. In this instance the brand will honor John’s (Jerry Douglas) dub of her, as Ashley’s line is called ‘My Beauty’.

Young And The Restless Spoilers – Jack Fell For Kerry

Reeling from family betrayals and the Dina issue, Jack was fully open to exploring new love. And then Kerry’s pretty face appeared. That along with her high-level tie to Jabot, made her fully appealing in Jack’s eyes.

To-date, Kerry has been the partner who’s suspected Jack’s intentions. She’s met and become aware of his many ex-wives and significant others, ranging in ladies from Phyllis to Jill (Jess Walton).

Based on what Hunter’s new character has said, she was hesitant to accept Jack’s romantic overtures at first because of the sensitive Jabot position and due to her own past relationship issues, with whatever they’d been. But she didn’t mention any serious personal problems, if there actually are any.

It could be the Kerry has a medical condition and needs to inject herself with a dose of prescribed medication on a daily basis. Based upon his pill addiction, Jack could easily knee-jerk into thinking that Kerry is shooting up with a substance that is unworthy of use.

Here’s hoping that whatever Kerry’s situation, Y&R continues to write this pleasant couple together. Jerry appears to give Jack his first clear shot at lasting love in a long time. Many of his relationships, or dalliances, have involved female characters who were unstable, including Phyllis (most infamously in her original incarnation as Michelle Stafford).

The Young and the Restless (YR) Spoilers: Mia and Billy Together? – Milly Has Potential https://t.co/OTDzl6Bw1u pic.twitter.com/pYReXg7fM5

Fans of Jack and uplifting daytime entertainment are open to normal connections that naturally build to marriage. Let’s have Jerry’s present be positive and future lead to the altar.