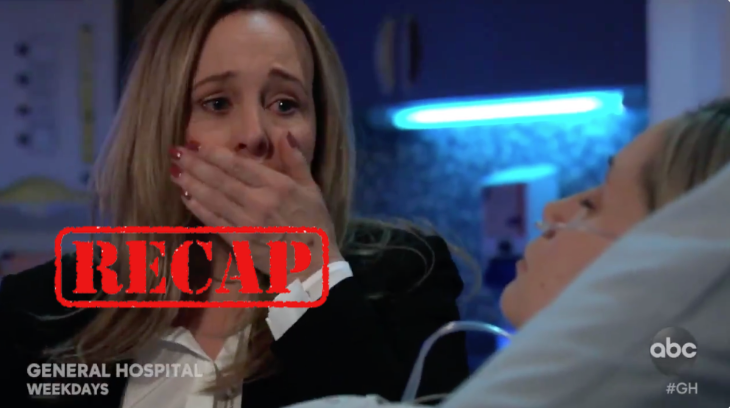 General Hospital (GH) recap for Friday, January 25, 2019, reveals Sam (Kelly Monaco) wakes up in bed with Jason (Steve Burton) and reaches over to touch his face.

Jason wakes up; Sam apologizes for waking him, she had to touch him to make sure he was there. Sam asks Jason if this is happening. Sam tells him she loves him so much, Jason loves her too, and they begin to kiss. Sam comes downstairs, and Jason has fixed breakfast. Sam says this is incredible, it is so familiar but strange. Jason tells Sam they will take this day by day, there is no pressure to figure this out.

Sam tells Jason how good the food is; it is so much better than toasted waffles. Sam asks what Jason has planned to do today. Jason is meeting with Spinelli (Bradford Anderson). Sam didn’t know Spinelli was in town; Jason has him checking into those emails. Sam say so he’s using that as an excuse to visit. Jason gets a text, Spinelli is at the airport and wants to meet at the metro court. Jason offers to tell Spinelli they can meet later. Jason asks Sam what is going on with her.

Is Jason glowing, West Coast? Carly is going to be thrilled when he fills her in on his night with Sam. A brand-new #GH STARTS NOW on ABC! @1SteveBurton pic.twitter.com/6mDH265WpN

Sam is afraid to let Jason leave because they were happy when he walked out the door before and she didn’t see him for five years. Jason tells Sam this is different, she asks why because it’s light out. Jason says he isn’t walking into a dangerous situation and assures Sam that he will be back. Jason offers to text Sam when he gets there and tells Spinelli she has hi, Sam kisses him and he leaves. Jason arrives at the metro court and text Sam to let her know he will be back soon, Carly (Laura Wright) grabs him before he hits send. Sam starts to text Jason and talks herself out of it. Sam has to talk herself down, but she doesn’t call. Jason arrives home, and Sam runs into his arms.

General Hospital’s Carly and Drew (Billy Miller) talk about Jocelyn (Eden McCoy) and Oscar (Garren Stitt). Drew tells Carly that Oscar is getting out of the hospital today. Carly tells Drew she is sorry about everything. Carly assures Drew that Oscar and Jocelyn know what they can’t do in the future. Drew says it is a delicate balance; he wants Oscar to live life to the full but to keep him safe.

Carly doesn’t know how Drew is standing. Drew says the coffee is good and Scout helps, he dares her to spend five minutes with her. Drew says someone very special taught him there are still things to look forward to in the future. Carly sees Jason walk in and runs into his arms. Jason reacts to the pain in his ribs. Carly apologizes to Jason and demands to know if he’s ok. Jason tells Sam she is the best he has been in six years.

Carly gets the underlying meaning and hugs him again. Carly is happy for Sam and Jason and tells him it’s about time. Carly makes Jason agree to let her tell Sonny (Maurice Benard), he does. Carly didn’t like Sam at first but realizes she might be almost worthy of him. Carly tells Sonny that Sam and Jason are back together.

General Hospital’s Liz (Rebecca Herbst) joins Franco (Roger Howarth) for coffee, Aiden (Jason David) and Jake (Hudson) come downstairs, he wants to play games, Jake promises to make sure Aiden stays offline. Jake asks if he shouldn’t have said anything about the kids at school. Liz tells him she is very proud of him for looking out for his brother. Liz asks Franco if Aiden is gay, what does it mean at this point.

As Aiden's situation at school becomes more clear, Elizabeth is determined to let him be himself. An all-new #GH starts RIGHT NOW on ABC! @RebeccaLHerbst pic.twitter.com/ouRJnNIBy3

Franco questions Liz on how she will react if Aiden is gay. Liz has been up researching all night, in some states, people can still get fired for being gay. Franco says they have ten years to worry about that and things may be different by then than it is now. Liz says they need to stop the bullying. Liz allows the boys to have a cupcake. Franco tells Liz everything will be fine.

General Hospital’s Anna (Finola Hughes) and Peter (Wes Ramsey) are at the PCPD. Peter tells Anna she didn’t have to stay there all night. Anna tells Peter to stop worrying about her, and he says he’s not worried. Peter didn’t ask Anna too but into his life like this. Peter tells Anna he will hire a lawyer if he needs one. Maxie (Kirsten Storms) arrives as well; Peter tells her she didn’t have to come. Jordan (Briana Nicole Henry) is ready to talk to Peter; he tells Maxie she doesn’t have to stay.

Anna goes into the interrogation room with Peter. Anna tells Peter this is serious and he needs to act like it. Anna tells Peter he is a suspect in multiple murders. Peter has on shoes that match the bloody footprint. Jordan asks what size Peter’s shoes are; he says twelve. Anna asks if the size matches, Jordan says no. Peter tells Jordan he might have a week alibi for Lulu’s (Emme Rylan) attack, but during Kiki’s (ex-Hayley Erin) murder, he was at her wedding and reception. Jordan goes to check the footage to make sure he was there. He waits with Maxie while Jordan checks the footage.

Peter asks Anna to leave, Maxie promises to keep her updated on what happens with him. Maxie tells Anna that Peter understands that she was worried. Maxie tells Peter that Anna is his mother and is overreacting because that is what mother’s do. Maxie tells Peter he can let Anna in, he can trust her. Peter says he is slow to trust, he can concentrate on Anna next year, she asks who he is concentrating on now, he smiles at her. Maxie tells Peter that James broke a window at Mac’s. Maxie asks Peter to go with her to pick up James.

General Hospital’s Laura (Genie Frances) is talking to Lulu telling her she needs to wake up. Sonny arrives and offers to come back if he needs to later. Laura says they are through the worst of it, and Lulu needs to wake up now. Laura asks if Sonny has gotten in touch with Dante (ex-Dominic Zamprogna), he is still trying. Sonny says Lulu’s recovery will be over by the time they get through to Dante. Sonny says the police are offering a reward for leads on the killer and he wants to contribute.

Laura waits by Lulu's side as her daughter fights for survival. Watch today's full episode of #GH – RIGHT NOW – without a login: https://t.co/b7Q3x3NTP8 #GH55

General Hospital’s Ryan (Jon Lindstrom) is anxious to see if the surgery restored his sight. Griffin (Matt Cohen) arrives to check on Ryan. Ava (Maura West) sees Griffin, Finn (Michael Easton) asks if this is going to be a problem. Ava and Griffin exchange unpleasantries. Ryan thinks he should request a different doctor. Griffin removes the bandages, and Ava slowly comes into focus.

Ryan says he sees the most beautiful woman in the world. Griffin says that Ryan, like Anna, has made an amazingly fast recovery. Ryan wants to go home; Griffin needs to run tests first. Ryan agrees as long as they don’t take long, he has pressing matters to attend to today. Ava asks Griffin about Lulu; he tells her Lulu will be fine. Ava says that is good because Lulu can give her the name of the bastard that killed her daughter.

General Hospital’s Finn walks into the hallway, and Robert (Tristan Rogers) is there. Robert asks if Finn can get Anna to return his phone calls. Finn tells Robert is it good to see him. Robert and Finn catch up, and Robert tells him he has intel on Anna’s sudden blindness. Robert did some research on Anna’s behalf and found some interesting information.

Robert tells Finn he hears he and Anna have shacked up. Finn asks if Robin told him, Robert says Emma. Robert asks if Finn is going to stick around, he says yes, Robert says he should get used to family interference. Anna steps out of the elevator. Anna asks why Robert is there; he shows her where Kevin (Jon Lindstrom) worked with the doctor they were researching. Kevin was a person of interest in the case. Anna and Finn wonder why he lied to them.