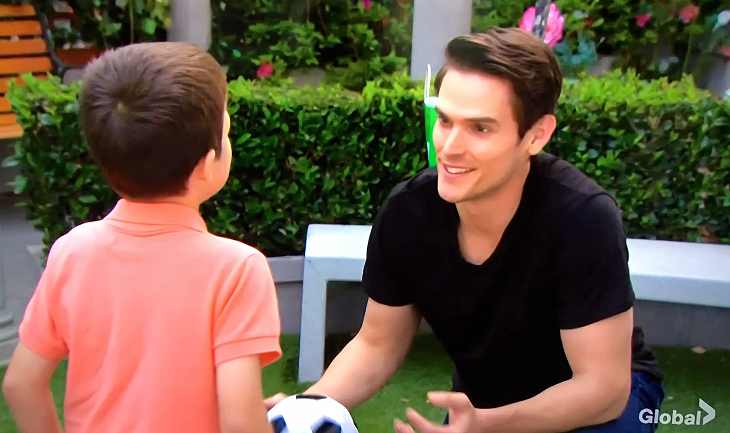 The Young and the Restless spoilers for Monday, August 5, tease that Phyllis Summers (Michelle Stafford) and Adam Newman (Mark Grossman) will talk at his penthouse. Phyllis will offer him $10 million for the Grand Phoenix hotel, but Adam will counter offer $15 million, prompting Phyllis to leave.

Afterwards, Michael Baldwin (Christian LeBlanc) will arrive and Adam will thank him for filing the petition with the court, as his first visit with Christian Newman (Jamie and Alister Tobias) is set for later. As it turns out, Michael will serve as Adam’s lawyer until he takes over as district attorney.

Next on Y&R, at Nick Newman’s (Joshua Morrow) house, he and Chelsea Lawson (Melissa Claire Egan) will discuss what she’s going to do with the $5 million that Calvin Boudreau (John Burke) left her. She’ll say that she hates it that her past is still hanging over her head, and she’ll refuse to return to life as a con.

At Society, Kyle Abbott (Michael Mealor) will talk with Theo Vanderway (Tyler Johnson), who will suggest throwing a bachelor party for Kyle – something Kyle won’t appreciate. They’ll argue about Theo causing trouble with Lola Rosales’ (Sasha Calle) mom, and then Phyllis will appear and blast Kyle for what he did to Summer Newman (Hunter King).

Afterwards, Theo will impress Phyllis with his vision for the launch party at the Grand Phoenix. He’ll note that the two of them are alike, and Phyllis will end up cautioning him about Summer, but that will lead to a mutual gripe session about what Kyle did to Summer.

In Chancellor Park, Adam will be awaiting his visitation with Christian when Billy Abbott (Jason Thompson) shows up and tells him that he’d better stop what he’s been doing. Adam will deny breaking into Billy’s house and putting Delia Abbott’s (Sophie Pollono) doll in his bed. Afterwards, Adam will call Nick and tell him that the court ruled that Victoria Newman (Amelia Heinle) was in violation of the order, and that he’s going to tell Christian that he’s his father, which will seriously upset Nick.

At Crimson Lights, Kyle will catch up with Mariah Copeland (Camryn Grimes) about his difficulties with Theo and his earlier run-in with Phyllis. Mariah will urge him to not let them get to him, and she’ll ultimately offer to throw a combined bachelor and bachelorette party for him and Lola.

Meanwhile, Nick will see Michael and blast him, saying that Christian’s life may be getting blown apart thanks to hi. He’ll realize that Adam must have something big that he’s holding over him. He’ll blame Michael for what Adam’s about to do to Christian.

At Society, Chelsea will run into Billy at the bar. They’ll discuss her husband’s death, and Chelsea will let him know that she’s staying in Genoa City. They’ll discuss how Adam offered her a deal to end the custody suit, but she didn’t take him up on it and that she and Connor Newman (Gunner and Ryder Gadbois) are moving on. Talk will turn to the Delia doll, and Chelsea will say that Adam wouldn’t have done that. Across the room, Theo will mention to Phyllis that it is too bad the Adam reaps the rewards of Phyllis’ efforts. Phyllis will reference something new being on her agenda.

In Chancellor Park, Adam and Christian will play soccer together. Adam will mention how his father taught him to play, although he didn’t know it was his father at the time. Adam will mention Connor and tell Christian that he and Connor are brothers. Adam will say that he’s Connor’s dad, and that he’s Christian’s real dad, too…right as Nick appears. Finally, on Monday’s new episode of Y&R, Billy will be at home, unable to sleep.