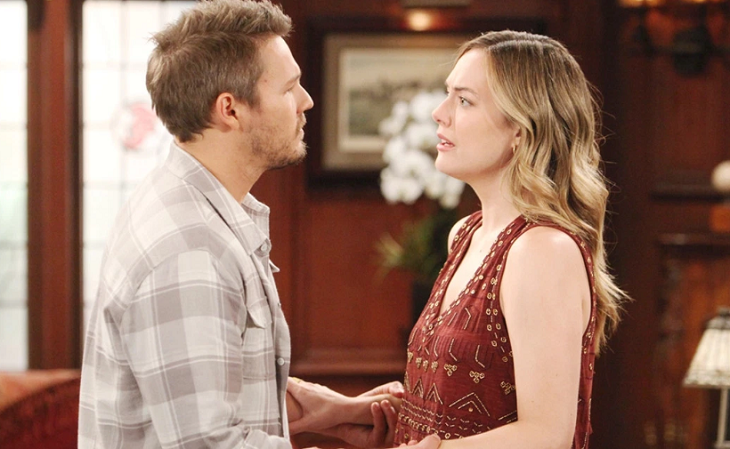 The Bold and the Beautiful spoilers for Monday, August 5, tease that Thomas Forrester (Matthew Atkinson) will be absolutely frantic. As B&B viewers know, he’s currently locked out of the Forrester CEO office, while Hope Forrester (Annika Noelle) is inside getting some major news from Liam Spencer (Scott Clifton). As Thomas was pounding on the door, Liam told Hope that their daughter Beth Spencer is alive, and that Phoebe Forrester (River Davidson and Madeline Valdez) is Beth.

Well, on Monday’s episode, things are going to get even more intense. As Hope tries to figure out what’s going on and why Liam is insisting that Beth is alive, Thomas will make his way into the room. According to B&B spoilers, Thomas will take drastic action to keep Liam from revealing more information to Hope. He’ll punch Liam, who will stumble and fall.

From there, Thomas will take Hope and go to the roof. As B&B viewers know, Thomas has ordered a helicopter, which is on its way to Forrester. His plan will be to take Hope and flee to parts unknown, where he can then tell Hope the version of events as he wants them to be told. Thomas will be in panic mode and not thinking clearly.

Well, Liam will pull himself together, as he’s not going to let Hope go anywhere with Thomas. He’ll make it up to the roof, where he’ll confront Thomas, who’s got Hope with the intention of getting her onto the helicopter. According to B&B spoilers, Thomas and Liam will have a major showdown, arguing fiercely while Liam confronts Thomas about his role in keeping Beth from him and Hope.

As a confused Hope listens to the men going back and forth, she’ll get the full story about what happened. Suddenly, she’ll realize that her daughter is alive, and that Thomas schemed to keep this from her. Ultimately, Thomas will capitalize on an opportunity to flee the scene, and he’ll bolt, leaving Hope and Liam alone.

Meanwhile, on Monday’s new episode of B&B, Florence “Flo” Fulton (Katrina Bowden) will have a major task on her hands. She’s now alone at the beach house with Wyatt Spencer (Darin Brooks). He has just heard about all of her lies and deception. He now knows that Flo never gave birth to Phoebe, participated in an illegal adoption scam, and kept the secret about Beth being alive for months.

It doesn’t look like it’s going to be a good scene. And there likely won’t be any kind of understanding or forgiveness. Wyatt’s going to be incredulous that the “honest” woman he knew could have been involved in keeping a baby from her parents. He’ll be especially peeved that her deception cost the people he loves so much heartbreak.

Flo may try to explain herself to Wyatt, but it doesn’t look like Wyatt’s going to want to hear it. After all, Flo had every opportunity to come clean over many months, and she chose not to – all so she could keep her new life as a Logan, or at least that’s how Wyatt will probably see it. Flo may try to explain that she was being threatened by Thomas, but Wyatt probably won’t buy it.

Ultimately, B&B spoilers say that Wyatt will dump Flo, since he just won’t be able to deal with the things she’s done. It looks like it will be the end of the road for Wyatt and Flo, with Flo’s worst fears being realized.