In a shocking move, Kyle Abbott (Michael Mealor) decided to marry Summer Newman (Hunter King) on The Young and the Restless. And, according to TV Insider, the actor shares what led to this decision and the pros and cons of marrying the Newman heiress. Here’s what you need to know about what’s ahead for the couple social media dubbed as Style.

The fact is Kyle married Summer for love, kind of. However, it’s not Summer he is in love with, it’s Lola Rosales (Sasha Calle). She just woke up from a coma after being attacked by her sister-in-law Mia Rosales (Noemi Gonzales).

The Young and the Restless spoilers point out that she was expecting Kyle to be by her side, but he is too busy trying to get her transplant donor to agree to the surgery. 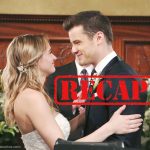 Young And The Restless Spoilers – How Is Lola Going To React?

The only way he could get Summer to hand over part of her liver was for Kyle to marry her. This is going to be very bad for Kyle when Lola finds out he is no longer a single man.

Obviously, the pro to marrying Nick Newman’s (Joshua Morrow) daughter is that she comes from the same background as he and she isn’t after his money. After all, Mealor joked that Summer should have gotten his signature on a prenup as the Newman family has way more wealth than the Abbotts. However, the actor says neither signed any such agreement.

Y&R spoilers say that it’s a tricky situation to marry Summer for Kyle as, at one time, he was in love with her. He wanted to be with her more than anything. Now, he’s in love with Lola and married Summer to protect her, but she won’t see it that way.

Michael suggests that after Summer and Kyle get married, he may discover that he still loves Summer after all. It could lead to a love triangle with Kyle stuck in the middle, having no idea which woman is better for him.

Who would you like to see Kyle with in the end? Don’t forget to come back for more The Young and the Restless (Y&R) spoilers, news, and casting updates!