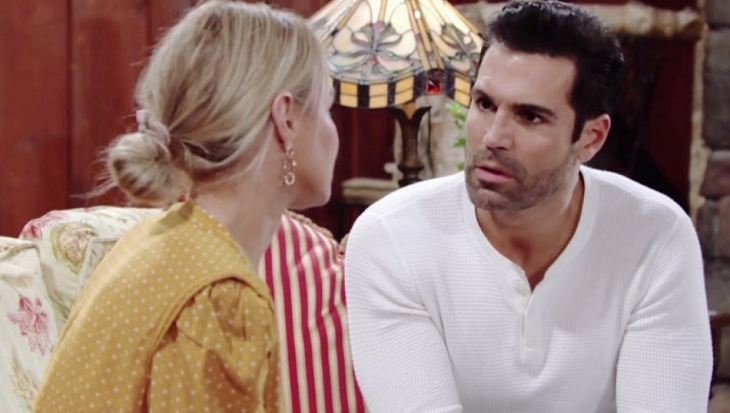 Young And The Restless (Y&R) spoilers tease that Rey Rosales (Jordi Vilasuso) and Sharon Newman (Sharon Case) are headed for an imminent break-up.

It all began a few months ago, when Sharon decided to help Adam Newman (Mark Grossman) regain his memories in Las Vegas. Rey was concerned about Sharon’s feelings for Adam from the get-go. Since then, they have had many arguments about Victor Newman’s (Eric Braeden) prodigal son.

Spoilers indicate Rey will move out of Sharon’s house and into Y&R’s Genoa City Athletic Club. Knowing his history with women cheating on him, Rey should have kept his apartment above Y&R’s Crimson Lights as a back-up!

Young And The Restless Spoilers – Many Arguments About Adam Newman

Rey and Sharon have argued about Adam ever since he returned to Genoa City. But the most recent straw that broke the camel’s back was Sharon’s decision to help Adam in his custody case against Nick Newman (Joshua Morrow).

Adam begged Sharon to become temporary guardian of Christian, a boy she had thought was her own and who she raised as Sully in the early months of his life.

Although she was hesitant at first, Sharon couldn’t help but be moved by Adam’s plea. She agreed to go with him to the judge. But alas, it was all for naught. Judge Sanchez (Joseph C. Phillips) granted guardianship to Christian’s aunt, Victoria Newman (Amelia Heinle).

Young And The Restless Spoilers – Is A Shadam Reunion Coming Soon?

After Rey moves out, Sharon will go to see him and ask him to be reasonable and move back into her cabin on Y&R’s Newman ranch. But he isn’t having it. Rey will tell her he is worried about her safety around Adam. He can also no longer watch her placating him.

Sharon doesn’t believe she has anything to fear from Adam. She will tell Rey she’s done with him dictating who she can be friends with. This will lead to the pair going their separate ways. Shey will be done before it had barely begun.

Viewers can’t help but wonder if all this is leading to a Shadam reunion in the near future. Now that Chelsea has rejected Adam and chosen Nick and it looks like Shey is over, will Sharon give into temptation with Adam?

Bold And The Beautiful Spoilers: Liam Is On Thomas’ Tail – Fierce Confrontation Coming