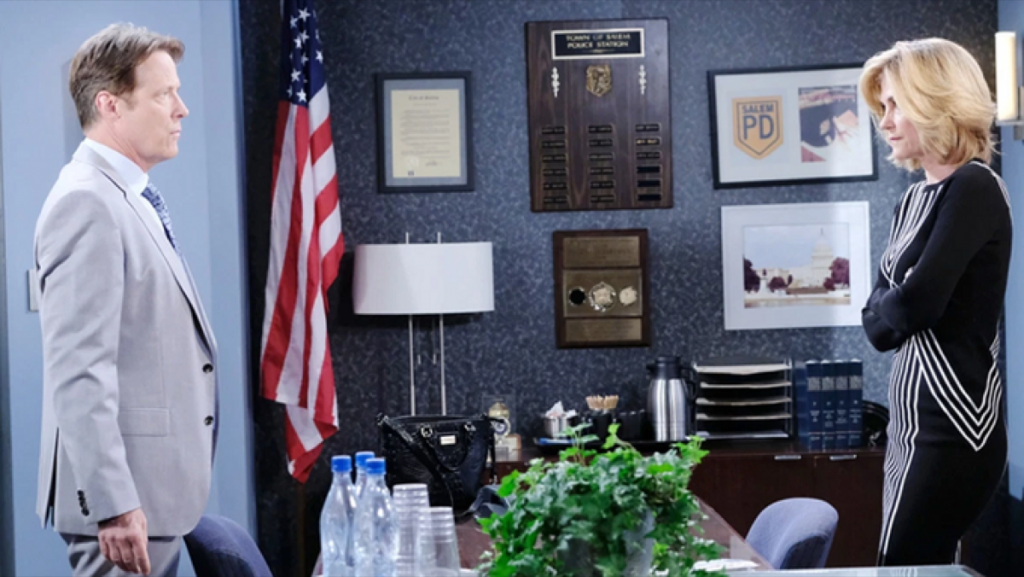 Days of Our Lives spoilers for Friday, July 26th finds Jack Deveraux (Matthew Ashford) catching Eve Donovan (Kassie de Paiva) in an act of betrayal. Also, Nicole Walker (Arianne Zucker) realizes that she needs help from someone in her past. Luckily, Tony DiMera (Thaa Penghlis) will be there for her. Tripp Dalton (Lucas Adams) tries to help Haley Chen (Thia Megia), but his efforts are a little misguided.

It begins with Jack catching his wife Eve in the ultimate betrayal. At first Eve made it sound like she was supportive of Jack and his decision to get his memories back. But little did Jack know that Eve was actually coming up with a serum of her own in order to trick him. After all, the last thing she needs is for Jack to remember just how much he hates her.

Days of Our Lives spoilers tease that this might be the beginning to the end of Jack and Eve’s relationship – and partnership – as he will soon be looking to pull the plug on their relationship. What remains to be seen is how Eve will fight this and of course, try to convince Jack that he still needs her.

Elsewhere, Kristen DiMera knows that she has very few people in Salem that she can count on. Using her ‘Nicole’ mask, she decides to reach out to an old alley – Tony. Kristen knows that she can’t do all of the dirty work on her own.

Now that Xander Cook (Paul Telfer) has turned his back on her, Kristen is reaching out to Tony in hopes that he will be her new partner in crime. Seeing how he still has a grudge against Xander, Tony is willing to do whatever Nicole wants. Little does Tony know that he’s actually dealing with two different people here.

Days of Our Lives Spoiler: Tripp Dalton Puts The Moves on Haley

Also, Tripp will try and help Haley as the two of them continue to suffer their PTSD, thanks to a knife-wielding Claire Brady (Olivia Rose Keegan) and her attempts to kill anyone who got in the way of her happiness. Haley is even getting nightmares about Claire and keeps going back to how she almost tried to kill her. While Tripp does have good intentions, the only problem is that he’s in need of help, too.

After managing to get his hands on some meds,  Tripp is going to make one wrong decision after another and unfortunately, it’s going to test his loyalty and friendship to JJ Deveraux (Casey Moss). That’s because he is going to be making his moves on Haley, much to everyone’s surprise, including JJ’s. Needless to say, fans will have to tune in to find out what will happen next.