Bold And The Beautiful Spoilers: Liam Is On Thomas’ Tail – Fierce Confrontation Coming 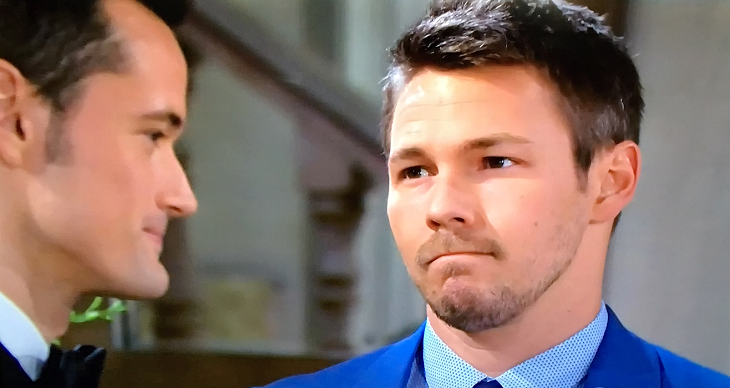 The Bold and the Beautiful spoilers tease that Thomas Forrester’s (Matthew Atkinson) accomplishment in marrying the woman he believes he’s loved for years hasn’t stopped him from spinning out. Viewers were allowed to see Hope Forrester’s (Annika Noelle) husband talking to himself in his bedroom after his bride opted to exit.

Somewhat surprisingly, Thomas controlled his disappointment. For now he’s rationalizing Hope’s behavior. Thomas is convinced that she loves him and is adjusting to her rushed engagement, wedding, and step-motherhood status.

Since what Thomas believes isn’t true, he’s bound to become increasingly frustrated. He has a whole host of targets, who he refers to as idiots when he’s having a conversation with himself. While self-talk can be productive, it can also represent evidence of an unbalanced mind. What B&B viewers have been seeing these past months is the revelation that Thomas isn’t healthy.

Bold And The Beautiful Spoilers – Grappling With Some Mental Health Issues

Newer fans learned that this character grappled with mental health issues. Viewers originally saw the recast of this character take place in the form of Atkinson earlier this year, Thomas seemed to be dealing with the loss of his son’s mother, but that was just a veneer.

An increasing number of Los Angeles, California, residents now know that Thomas is in the full throes of mental derangement. His multiple crimes and amoral acts aren’t even regretted, as Thomas sees them as a means to his ends. Marrying Hope, having her mother Douglas Forrester (Henry Joseph Samiri), and then Thope expanding their family through the birth of other children is Thomas’ fuzzy vision.

Hope clearly still loves Liam, which Thomas recognizes and loathes. While he fronts a condescending face to Clifton’s character, Thomas is deeply irked by Liam’s ongoing involvement in Hope’s life.

Thomas has and will not likely tolerate Liam, or anyone else preventing him from taking the next step with Hope. That includes his wife, who appears fully vulnerable to being drugged in order to facilitate a romantic encounter, which would become yet another crime.

Liam kept himself hidden when Thomas was having it out with Flo Fulton Logan (Katrina Bowden). This was smart on Liam’s part, because he heard what should eventually prove to be devastating information. That scene came after Thomas ringed Hope.

Bold and the Beautiful Spoilers: Hope Blindsided By Crazy Thomas – How Many More People Will Die @celebratesoaps https://t.co/OO84UOLNeI

The secret both people were referencing wasn’t detailed. However, it did provide Liam with impetus and the direction he needs to stay on Thomas’ tail. The route will be hard, which is rightly soapy. However, the increasing pressure Liam’s efforts will apply, along with the other’s efforts, will give Thomas more to consider and calculate for. That’s when at least one mistake can be made. And it will lead to the end of this storyline and possibly a final confrontation between Thomas and Liam.

Days of Our Lives Spoilers: Jack Catches Eve In An Act Of Betrayal – Promptly Demands Divorce