General Hospital Spoilers: Is Dawn Of Day A Front For Human Trafficking? 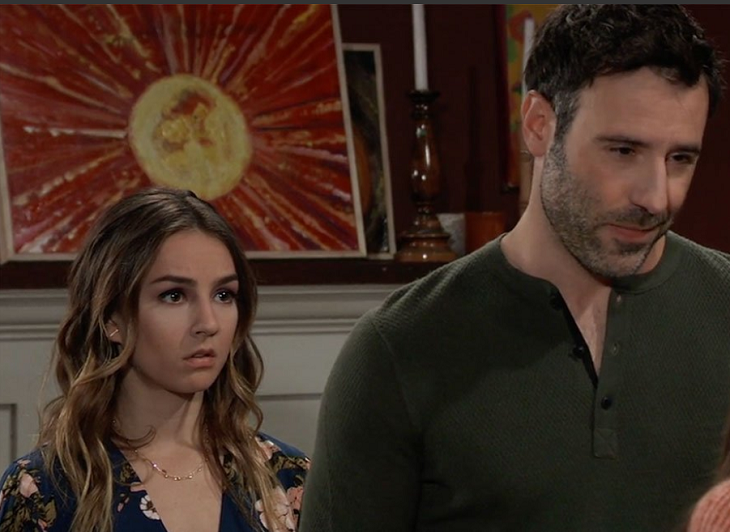 General Hospital spoilers tease that Dawn of Day may be a front for human trafficking! The large black mark exposed on Daisy Kwan’s (Kelsey Wang) lower back as she was bending over to pick up toys made her look like she’d been branded. Daisy had gone to Sam McCall’s (Kelly Monaco) penthouse, to ask forgiveness for the emails and Leland Powell’s obituary in the mail.

Some GH fans are calling it a tattoo, but tattoo needles don’t generally make marks that large. A branding iron, however, which is heated up to be fiery hot and then applied to the skin to make a permanent mark, can leave much larger marks. It’s not unusual for human traffickers to brand their victims, like farmers or ranchers brand farm animals.

General Hospital fans saw yesterday that the brand on Daisy’s lower back was the same as on Shiloh Archer’s (Coby Ryan McLaughlin) tablet, where he said to himself that he had big plans for Kristina Corinthos-Davis (Lexi Ainsworth).

This means Kristina is getting herself into much more of a sinister organization than GH fans could have ever imagined, and in possibly mortal danger. Daisy visibly shook as she asked Shiloh if she was being punished, when he had demoted her from ambassador to serving refreshments earlier. She was also visibly shook when Sam asked her about the brand mark. There must be extremely dire consequences for someone who misbehaves or fails in some way at Dawn of Day.

General Hospital Rumor: The End Of Ryan – Or Is It?

According to the official website of the Department Of Homeland Security, human trafficking is defined as follows: “Human trafficking is modern-day slavery and involves the use of force, fraud, or coercion to obtain some type of labor or commercial sex act.”

This could include slavery in the sex trade, or being a drug mule, having to ingest or hide drugs in the orifices of one’s body, which is quite dangerous, especially with drugs like fentanyl.

Also DHS.GOV describes what human traffickers look for in victims and how they go about obtaining them: “Traffickers use force, fraud, or coercion to lure their victims and force them into labor or commercial sexual exploitation. They look for people who are susceptible for a variety of reasons, including psychological or emotional vulnerability, economic hardship, lack of a social safety net, natural disasters, or political instability”. This sounds an awful lot like Dawn of Day.

General Hospital Spoilers: Did Ryan And Kevin Participate In The Twin Study?#GHhttps://t.co/8u7zAQ8aBo

Sam and Jason need to not only rescue Kristina, but Daisy as well, and get the authorities involved in the investigation. Stay tuned to GH and keep checking General Hospital spoilers frequently to see the latest updates, news, and spoilers!