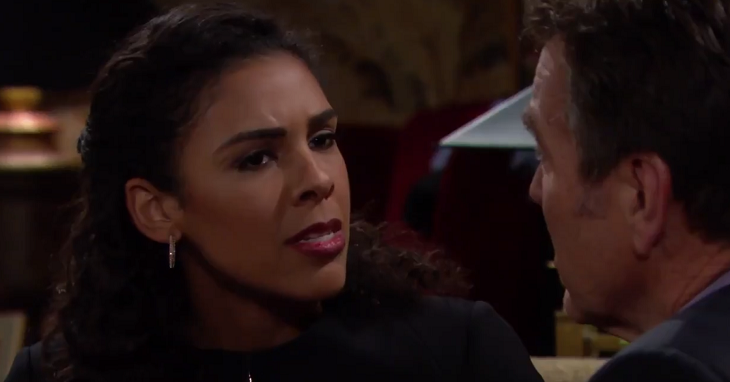 Alice Hunter, the actress who plays Kerry Johnson on the Young And The Restless (Y&R), announced on her Twitter account that her character will be off the canvas shortly.

“To all asking – yes, Kerry is taking an indefinite hiatus. She earns it though 😂 you’ll see soon enough,” Hunter posted. “I LOVE the arc, even if I’m sad to leave.”

Last week, she had tweeted a photo of herself with Peter Bergman (Jack Abbott) and Gina Tognoni (Phyllis Summers) with the caption: “My mentors. My friends. This journey has been indescribable. #YR.” This prompted many fans to ask her if she was indeed leaving the show.

The Y&R cast and crew threw her a send-off to remember last Friday and Hunter posted a clip of the surprise party on Twitter.

Young And The Restless – Hunter Landed On The Soap Last Fall

The character of Kerry arrived on Y&R late last fall, shortly after Ashley Abbott (Eileen Davidson) took off for Paris to escape Abbott family drama. Kerry was a chemist hired at Jabot when Phyllis took over as CEO. She worked closely with both Phyllis and Lauren Fenmore (Tracey Bregman).

Kerry had been romantically paired on the Y&R with Jack. Many viewers were uncomfortable with the age disparity between the two actors – Hunter is 29 years old and Bergman is 65.

It was felt by some that the character of Kerry would have been a better match for Devon Hamilton (Bryton James), Nate Hastings (Brooks Darnell) or Billy Abbott (Jason Thompson).

Young And The Restless – What Will Happen To The Other Newbies?

Even though fans are sad to see the actress leave the show, she mentioned that more room needed to be made for other cast members. Viewers are hoping this means more vets will be brought back to the canvas or current vets will be getting more airtime. So far, there is no word on Hunter’s last air date on the soap.

To all asking – yes, Kerry is taking an indefinite hiatus. She earns it though 😂 you’ll see soon enough. I LOVE the arc, even if I’m sad to leave. And yes, a bunch of #YR cast & crew surprised me Friday and it was something I’ll never forget 🙈🍾 https://t.co/hQ4M9AiQTT

Hunter’s departure has prompted speculation from fans on what this may mean for some of the other relative newbies on Y&R. Will viewers also see the departure of the Rosales family, including Rey (Jordi Vilasuso), Arturo (Jason Canela), Mia (Noemi Gonzalez) and Lola (Sasha Calle) sometime soon? We’ll just have to wait and see what the future brings.

Bold And The Beautiful Spoilers: Wyatt and Flo Revisit Their Past – Zoe Panics As Flo Spends Time With Liam and Hope