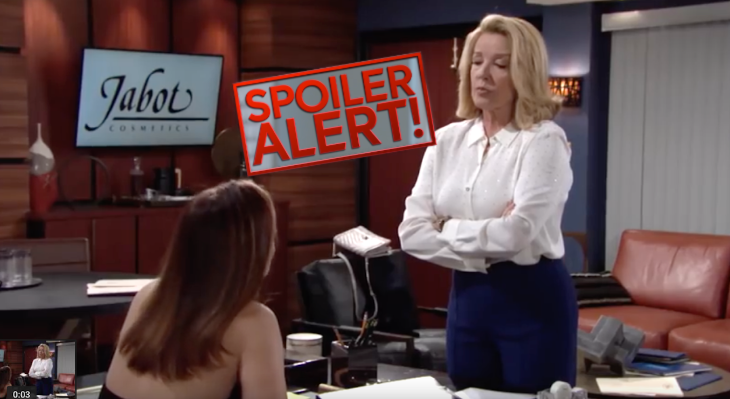 “Young and the Restless” spoilers for Thursday, January 24, tease that Devon Hamilton (Bryton James) will seek answers. At his penthouse, Devon convinces Ana Hamilton (Loren Lott) to open up about her bad experience in the music industry. She explains her reasons for wanting to write songs anonymously, which makes Devon worry that she doesn’t trust him.

Ana reassures Devon and insists that she just prefers doing it this way. He decides he can accept her wishes, so Ana is pleased. Afterward, Devon listens to Ana singing at the piano. He gets choked up over a tune about memories, so Hilary Hamilton (Mishael Morgan) is undoubtedly flooding his thoughts.

At Jabot, Phyllis Summers (Gina Tognoni) defends herself to Nikki Newman (Melody Thomas Scott). She contends that Nikki and Victoria Newman (Amelia Heinle) could’ve taken her down along with Sharon Newman (Sharon Case). Phyllis couldn’t trust the Newmans, so she kept the fireplace poker for protection.

However, Phyllis claims she doesn’t know how the poker ended up at the ranch. According to Phyllis, it was in a storage locker the last time she saw it. Nikki doesn’t buy that for a second. She refuses to listen as Phyllis rants about finding the person who really framed Victor Newman (Eric Braeden). Nikki thinks Phyllis is the only one the cover-up crew needs to handle.

At Victoria’s house, she talks to Sharon about Phyllis as well. Victoria gets updates on Phyllis’ attempt to form another alliance. She’s not exactly shocked by that. Victoria mentions that Phyllis has already been trying to ruin her relationship with Billy Abbott (Jason Thompson). She brings up the rebound thing and admits she’s been making out with a married man.

Sharon confirms that Cane Ashby (Daniel Goddard) was the other pair of lips. She also finds out that Billy walked in on a steamy moment. Victoria confesses that she’s really falling for Billy again, but she doesn’t think it can work. She’s got so much J.T. Hellstrom (Thad Luckinbill) baggage, so Victoria thinks it’s wise to push Billy away.

Whew you don't mess with the Newman Matriarch!
Nikki is fixing to show Phyllis what Mrs. Victor Newman & a real, TRUE Momma bear will do to protect her family! #YR #Niktor #TeamNikki #WCW @MelodyThomasSco pic.twitter.com/dwyXl7d1dA

Sharon doesn’t think Victoria should let anything hold her back. If Victoria wants to be with Billy, Sharon suggests she should make it happen. The ladies lean in for a sweet hug. Later, Nikki fills Victoria in on Phyllis’ fireplace poker admission. She maintains that Phyllis is the one setting Victor up and believes they have to do something.

Victoria suggests that Nick Newman (Joshua Morrow) deserves to hear about this. He needs to know the kind of woman he’s sleeping with. Nikki agrees, so she gives Nick a call. On the phone, she notes that her news could rock the investigation and Nick’s relationship.

Over with Abby Newman (Melissa Reeves), she isn’t thrilled about attending Mia Rosales (Noemi Gonzalez) and Rey Rosales (Jordi Vilasuso) vow renewal. Nevertheless, Arturo Rosales (Jason Canela) is the best man and Abby wants to be there for him. Arturo’s happy about that and promises to make this an unforgettable night for Abby.

The ceremony eventually gets underway, so Mia and Rey say all the right things to each other. Rey feels lucky that they overcame their obstacles. He’s glad Mia is by his side. Mia contends that Rey is her miracle and she’s lost without the love they share. After they kiss, Arturo pipes up with a big announcement. He gets down on one knee and stuns Abby by asking her to marry him.

Back at Jabot, Phyllis has some awkward advice for Billy. He’s fretting about Victoria’s strange behavior and can’t make sense of what she wants. Phyllis hints that Victoria’s wounds are profound. She warns that Billy has to decide if he’s willing to work at it or if he just wants to bow out.

“The Young and the Restless” spoilers say Billy’s love life will remain complicated, but there’s hope for “Villy’s” future. We’ll keep you posted as other Y&R details and rumors emerge. Stay tuned to see what’s next in Genoa City.