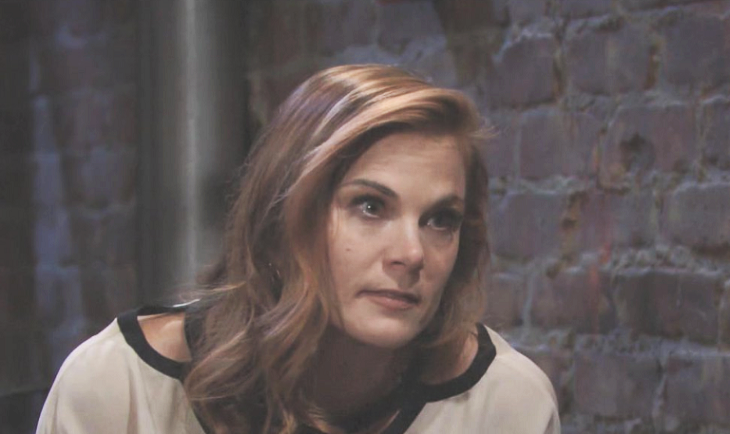 Phyllis Summers (Gina Tognoni) hasn’t had it easy lately on ‘The Young and the Restless’. As of mid-May she’s working on her own. She’s determined to establish an accessories company, but more intent on getting back at Jack Abbott (Peter Bergman).

As Y&R fans know, Billy Abbott (Jason Thompson) gave his former flame a gaggle of cash in hopes of being rid of Red and her baggage. The disorderly term that preceded the money term in the last sentence was intentional, as it also covers what Billy and Phyllis were together.

Remnants of the one-time Philly no longer exist, which fueled the request for walk-away money. Without that payment Phyllis wouldn’t have been able to found her new company.

Jack’s smiling turn-down of Phyllis’ hope to partner with Jabot infuriated his twice-wife. She had no problem unjustly accessing the Abbott family company’s server in order to ascertain insider information. Thoughts about her twice husband were rationalized in pursuit of business.

It seems as though Phyllis will continue playing dirty during the final weeks of Tognoni’s run, which will serve as a write-in to the return of Michelle Stafford. Yes, the torch pass to the original Phyllis has begun.

Tognoni is departing Y&R with her head held high. Her 2017 Daytime Emmy award in the Outstanding Leading Actress category once again affirmed that a classic character can be played brilliantly by more than one actor, just as her two earlier Emmy’s (2006, 2008) did.

Young And The Restless Spoilers – Both Characters Single

Stafford’s edition is the first Phyllis. Her return this summer, after her General Hospital contract is completed, will surely become an event to watch. But in the meantime, seasoned daytime fans are enjoying Tognoni’s farewell scenes during these final weeks.

Intentionally written and performed differently, Y&R and Tognoni hit the right mark with the current Phyllis. Her vulnerability was stressed, which leaves a lasting, positive impression.

It would seem that with Jack and Phyllis being single, both characters are left open to revisiting history. They’re fighting now, but a future look to the past is inevitable.

What starts as getting back at Jack can turn into getting back with Jack. Though all who are familiar with any version of Phyllis understand that various men have always sought to be with her as well.