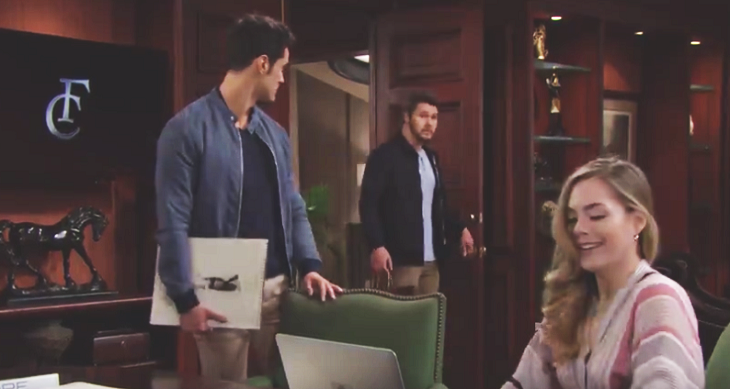 The Bold and the Beautiful (B&B) spoilers tease that Liam Spencer (Scott Clifton) will fume after Wyatt Spencer (Darin Brooks) tips him off to Thomas Forrester’s (Matthew Atkinson) advances.

During the week of May 6-10, Wyatt explained that Thomas was making moves on Hope Spencer (Annika Noelle) and advised Liam to return home immediately. He felt it was crucial for Liam to protect Hope and his marriage.

Liam agreed and caught the first flight out of Paris. He was hesitant to leave Hope anyway, but this made him see he was needed more than he thought. Liam certainly won’t think Thomas should be pestering his vulnerable wife. He may not view Thomas as a real threat at this point, but he won’t want Hope targeted by his creepy behavior either way.

Bold and the Beautiful spoilers say Thomas will still hope for a future with the woman he loves. He’s quickly become obsessed with Hope and having a family with her.

Bold And The Beautiful Spoilers Friday, May 10: Sally And Quinn Have It Out – Liam Declares War On Thomas

Thomas claims he never really got over Hope, but we all know this is more of a story-related choice. Nevertheless, Thomas is definitely determined to win Hope over. He refuses to take no for an answer, and that just won’t work for Liam.

B&B fans can expect Liam to confront Thomas about his behavior. The Bold and the Beautiful spoilers say Thomas will be surprised by the sudden attack. He thought he was being so smooth, but he’ll have to deal with the fact that his secret’s out. Of course, it won’t change how Thomas feels about Hope. It doesn’t look like it’ll keep him from pursuing her either!

Liam will warn Thomas to back off, but Thomas will fire back that he’s the better man for Hope. They’ll have a major showdown over who really deserves to be with her. Thomas will feel like Liam’s always going to waffle back and forth between his loves. He won’t think Liam can truly commit to Hope when he’s still carrying a torch for Steffy Forrester (Jacqueline MacInnes Wood).

Liam will insist that Hope is his wife and make it clear that his vows matter. He won’t want Thomas coming around and trying to mess things up for them – especially since Hope’s already been through so much.

Bold And The Beautiful Spoilers: Flo Worries When Hope Opens Up About Her Crumbling Marriage https://t.co/ELy2WbQqcI pic.twitter.com/kjptbraHJn

Losing Beth was a tough blow, so Liam will do everything he can to save their marriage. He’ll believe they need each other, but what about Steffy? Is Thomas right that Liam will always drift back to her?