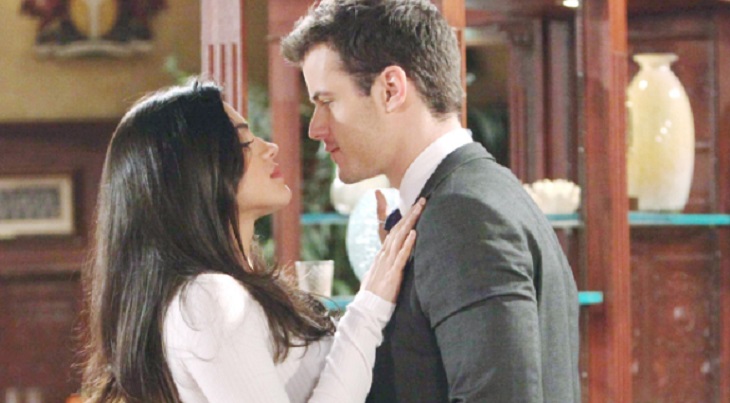 Last week on The Young And The Restless (Y&R), the domestication of Kyle Abbott (Michael Mealor) continued.

This character has gone from a ruthless playboy to an absolute snooze fest. The reason for this? His relationship with fiancé Lola Rosales (Sasha Calle). All Kyle ever does anymore is cater to Lola and spend his time canoodling with her. Yawn.

Theo Vanderway (Tyler Johnson) and Summer Newman (Hunter King) tried and failed to bring out just a hint of the old Kyle this week, when they created a pop-up party at the Abbott estate. But instead of joining in on the fun, domesticated Kyle was annoyed by it all and wanted them to leave. Even Lola seemed to enjoy herself at the gathering.

Summer and Theo should have considered holding Kyle down and pouring a bottle of tequila down his throat. At least it would have made this character somewhat interesting for one episode.

Speaking of tequila, poor Victor Newman (Eric Braeden) got angry with a bartender at Y&R’s Society because they didn’t have his brand of the Mexican liquor. He sternly told the startled bar keep that they had stocked his brand there for years. Obviously, the medication Victor is on for his rare blood disease is causing him some mass confusion. Let’s hope his condition gets better before his confusion gets any worse.

And it wasn’t until this past week that I recognized what a genius move Y&R producers made bringing back Michelle Stafford as Phyllis Summers. At first, like a lot of other fans, I thought it was a mistake replacing Gina Tognoni with Stafford. But the history Stafford’s version of Phyllis has with many of the other characters on this show is so rich, vibrant and filled with innuendo.

Young And The Restless Review – The Bug Has Finally Been Squashed

When she’s chatting with Paul Williams (Doug Davidson) or Christine Williams (Lauralee Bell), one can’t help but remember the epic 1994 Y&R episode when Phyllis ran both down with her car – and got away with it!

This week, Paul wanted to question Phyllis about her recent trip to Las Vegas. But Red wasn’t going to take any flack from the police chief and basically told him it was none of his business and to get bent. Classic Phyllis. Then, she had a run-in with Cricket, or “The Bug” as Phyllis likes to call her, at Y&R’s Crimson Lights. She couldn’t help mention she’d heard Christine wasn’t running for re-election as DA.

“I’ll throw a party in November when it’s official…the Bug is finally squashed,” she quipped, with a gleam in her eye.

Are you enjoying Stafford’s return to the Y&R as much as I am? And do you think Kyle will ever be interesting again? Let us know in our comments section.