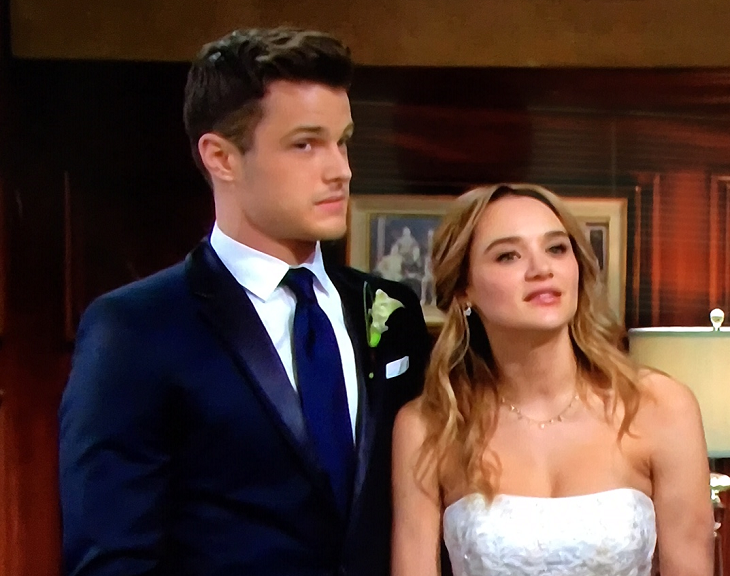 The Young and the Restless rumors indicate that Summer Newman (Hunter King) and Kyle’ Abbott’s (Michael Mealor) marriage will be lasting a bit longer, thanks to an unexpected surprise.

Summer and Kyle’s marriage of convenience took place this week. In exchange for donating her kidney to Lola Rosales (Sasha Calle), Summer finally gets to call herself Mrs. Kyle Abbott.

Kyle’s heart belongs to Lola and he’s shown he’s willing to do anything for her, including give up his happiness for her to live. Even though Kyle’s laid down some ground rules for his marriage to Summer, that all goes out the window during the couple’s wedding night.

As Summer expresses her fears about the upcoming surgery, Kyle comforts her, and before long the two are becoming intimate.

Y&R fans are already speculating that the couple’s night of passion is going to lead to pregnancy.

An unexpected pregnancy is going to further complicate Kyle’s life. He’s worked hard to get Lola to trust him, and she isn’t going to be happy to learn of his marriage to Summer, and the reason for their union. If Summer does become pregnant, it’s going to drive an even bigger wedge between Kyle and Lola.

Young And The Restless Spoilers – Will Kyle Do The Right Thing?

While Summer is happy with her marriage to Kyle and that the two are going to be parents, Kyle’s going to be left at a crossroads. He loves Lola and wants to be with her, however, a baby will have him questioning the right thing to do.

Kyle was raised mostly by his mother and rarely saw his father Jack Abbott (Peter Bergman), which put a strain on the father and son relationship. Kyle doesn’t want the same thing for his child, and he’ll decide to stay with Summer in order to be part of his baby’s life.

Young And The Restless Brytni Sarpy Speaks Out About Her Move From GH To Y&R @SoapOperaSpy https://t.co/yljFjZNmjI #YR #YoungandTheRestless #GH

Do you think Summer will become pregnant? If so, will Kyle stay with her or will he choose Lola?