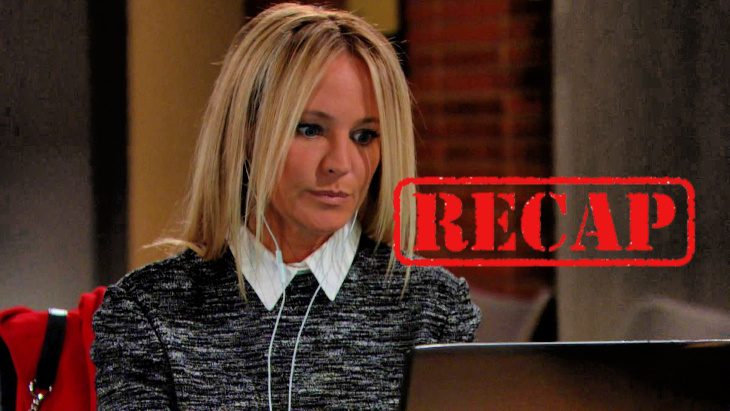 “The Young and the Restless” (YR) recap for Wednesday, February 6, 2019 reveals that over at the Club, Devon Hamilton (Bryton James) directs some workers setting things up, then thanks Ana Hamilton (Loren Lott) for this great idea to reveal Fenmore Baldwin (Zach Tinder) to the industry. Ana assures Devon this will be a huge success. She then texts Fenmore to come early.

Neil Winters (Kristoff St. John) arrives and says he wouldn’t miss Devon’s big night. The father and son sit down and Devon tells him how great Ana’s been, and that his anxiety’s under control. Neil’s glad. Ana chats with Neil, then it’s time to get started. Devon welcomes everyone and invites them to stick around for their new artist. Ana texts Fen again.

Over at the police station, Mariah Copeland (Camryn Grimes) arrives where Sharon McAvoy (Sharon Case) is filling in on the tip line. Mariah updates her that Tessa Porter (Cait Fairbanks) got hired at Abby Newman (Melissa Ordway) and Lola Rosales’ (Sasha Calle) new restaurant and she told them Sharon McAvoy let her go because of their relationship. Sharon agrees to back up the story if they call.

The Love Train is coming your way next week on #YR! @CBSDaytime pic.twitter.com/p4wUXd4y7i

She returns to the tip line and sees an email with the subject line ‘proof that Victor Newman (Eric Braeden) is a murderer’. She opens it and finds an audio file of Victor and Nick Newman (Joshua Morrow) talking about getting rid of the murder weapon. Rey Rosales (Jordi Vilasuso) appears and she asks if she should delete the tips that are dead ends. He relays she’d get fired if she did and they’ve already been logged. Sharon takes a break.

At Crimson Lights, Kyle Abbott (Michael Mealor) is worried about Lola Rosales burning herself out. He suggests dinner and a movie with Mariah Copeland and Tessa Porter. Lola decides he’s right. Inside, Fenmore Baldwin and Summer Newman (Hunter King) arrive. He relays Ana Hamilton wants him to go to the Club early, but he’s nervous and would rather swoop in right before he goes on. Mariah and Tessa appear. Kyle and Lola join them, but the movie’s not for another hour. Summer suggests they all have hot chocolate. Lola agrees, “Let’s do it.”

They sit and make conversation. Fenmore and Kyle’s photo shoot comes up. Lola’s surprised Kyle didn’t mention it. Fenmore gets another text from Ana and wants to go get a drink, but Summer wants to stay. Meanwhile, Tessa admits to Mariah that Fenmore’s success is making her think about what might have been. They rejoin the others, and Summer insists on showing Fen and Kyle’s photos, which irks Kyle. Lola decides she’s too tired for the movie. Kyle steps out with her, where she admits she felt out-of-the-loop on the photos and says Summer’s stalking him.

She rants loudly about his behavior around Summer and that it might be different if they were having sex. Kyle admits a part of him is disappointed and he doesn’t know when or if she’ll be ready and has professed his love repeatedly. He believes she still doesn’t trust him. Lola exits crying.

Back over at the Athletic Club, Devon tells Neil and Ana how upset he is about Fen’s disrespect in not being there yet and leaves him an angry voicemail.

Back at Crimson Lights, Fenmore Baldwin ignores his phone as he teases Kyle Abbott about not having sex with Lola Rosales. He realizes he’s late and heads out. Summer Newman elects to stay. Mariah Copeland makes an attempt at discussing celibacy, so Kyle moves to leave. Summer stops him and says a relationship is supposed to meet the needs of both people and Lola’s not doing that for him. Kyle begins to protest but Summer argues just because she’s great, doesn’t mean she’s the right girl.

In the Club dining room, Devon Hamilton is ready to announce his singer didn’t show up. Neil Winters tells Ana Hamilton she can save the day by performing. She whispers to Devon, who announces her, and she sings. Fenmore Baldwin arrives as she finishes to applause. Neil tells Devon she did it for him and that’s what family does.

At Dark Horse, Sharon McAvoy asks Nick Newman if they’re alone then tells him about the audio file that came in on the tip line. She warns they were talking about the murder weapon, and the police might think they meant the gun. Nick realizes the person recorded them in the living room and it’s the next step in framing Victor Newman. He explains what they found in the walls.

Sharon’s stunned that Katie was interacting with this person. Nick knows it sounds crazy, but it could be J.T. Hellstrom (Thad Luckinbill). Sharon feels it’s likely someone else. Sharon warns if the police hear the recording, he could be forced to testify or be charged as an accessory. Nick asks if she’d delete it, then apologizes. Sharon can’t. He understands. 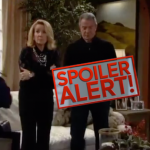 Back over at the station, Rey Rosales tells Sharon McAvoy he needs more evidence against Victor Newman – if the case fails, he’ll be the fall guy. Sharon sympathizes and they discuss the situation before she goes back to the tip line emails. Eventually, she shows him the audio file. Rey listens, then tells Sharon she did the right thing and that this could convict Victor Newman.