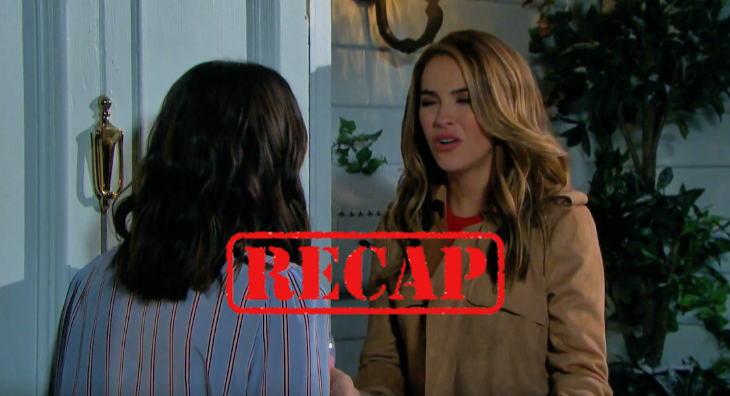 Days of Our Lives (DOOL) recap for Wednesday, February 6, 2019, reveals Eric (Greg Vaughan) hears rustling outside his door and open it with a baseball bat in hand.

Sarah (Linsey Godfrey) and Rex (Kyle Lowder) are in the hallway kissing. Eric leaves and runs into Marlena (Deidre Hall) outside the pub. Eric tells Marlena that Rex and Sarah are at this place. Ben (Robert Scott Wilson) approaches Marlena and Eric and confronts her about talking to Hope (Kristian Alfonso). Eric tries to defuse the situation, and Marlena gets between them.

Marlena tells Ben confidentiality doesn’t apply if she thinks a crime could be committed. Marlena says Hope was worried about Ciara (Victoria Konefal). Ben says he is too and asks if she thinks he kidnapped Ciara. Ben tells Marlena that he can’t trust her any longer because she sold him down the river. Marlena wants Ben to go to her office for a session. Ben tells Marlena that he opened up to her, but he won’t trust her again. Ben says he will find Ciara and Marlena and Hope can go to hell. Ben goes to his hotel room and vows to find Ciara wherever she is.

Days of Our Lives’ Marlena, John (Drake Hogestyn), and Roman (Josh Taylor) discuss Diana (Judith Chapman) and Leo (Greg Rikaart). Roman is shocked to find out that Diana is John’s ex-girlfriend. Roman asks if Diana can convince Leo to back off, John didn’t get the impression. Marlena asks John to try again; he agrees to think about it. Marlena asks if Eric talked to Sarah, he says she was with Rex. Marlena tells Eric that Sarah may think she doesn’t deserve anyone else.

In the latest #DAYS, John is shocked to realize he knows Leo's mom.https://t.co/ZsCmioRrzb pic.twitter.com/ihPoNs2uO9

Inside, John tells Roman that Leo could be his son. Roman asks why John believes Leo is his son. John doesn’t know how he or Marlena will handle it if his son is hurting Leo like this. Roman tells John that Marlena won’t hold being Leo’s father against him. Roman suggests John asks if he’s Leo’s father, John isn’t sure he wants to know. Roman asks John if he doesn’t want to know for sure. John tells Roman he is going to swing by Diana’s and see what he can find out. John goes outside, he and Marlena go home together.

Days of Our Lives’ Leo gives Diana a ticket and orders her to leave town. Leo accuses Diana of not loving him. Diana tells Leo he confused her. Diana tells Leo she has no problem with him being gay, but he’s a sociopath. Diana asks why he has chosen to destroy the lives of two decent men. Diana tells Leo she’s not ready to leave Salem, he asks if she means John Black. Diana refuses to discuss John Black with him. Leo thinks Diana is trying to get John away from Marlena.

Leo tells Diana he knows her and she will get drunk and tell his secrets. Diana asks if he thinks she will tell John he is a murderer. Diana tells Leo he will lose his hold over Sonny if he finds out Leo is a murderer. Leo tells Diana she would be happy if he was gone. Leo says he has always been a disappointment to Diana. Diana tells Leo she still carries a photo of him in her wallet from when he was ten.

Jordan asks if there is any hope of Chad (Billy Flynn) and Abby reuniting. Abby tells Jordan that is it possible. Abby tells Jordan that Ben was working for Stefan. Abby was afraid Ben would take Charlotte like he took Thomas. Abby says it took everything in her to push down the fear and leave with Charlotte. Jordan says Abby doesn’t know what Ben would have done if Stefan (Tyler Christopher) hadn’t stopped him.

Abby tells Jordan she was glad the Ben didn’t go after her. Jordan suggests that Ben would come after Charlotte for revenge. Abby tells Jordan she can’t live her life in fear, she needs to move on and let Ben do the same. Jordan tells Abby she’s going to check on Ben. Abby takes the teapot into the kitchen as Jordan slips upstairs to grab Charlotte,

In the latest #DAYS, Stefan risks his life to save Chloe's.https://t.co/ZsCmioRrzb pic.twitter.com/l0F3RJ5AXI

Days of Our Lives’ Sarah doesn’t feel right sleeping with Rex at Eric’s place. Sarah says Eric looks at her like he hates her. Sarah isn’t so sure that Eric will ever make up with her. Rex says he just got his girlfriend back, he’s positive it will work out. Sarah doesn’t want to rush thing, she forgave but hasn’t forgotten. Rex keeps trying to explain, and it upsets Sarah that much more.

Rex suggests they make happier memories instead of bringing up the pain. Rex understands that trust will take time. Sarah hopes trust is all it takes this time. Rex offers to take Sarah home. Sarah says she thought it was a good idea to stop things tonight. Sarah changes her mind, and she and Rex begin to make love. Eric arrives home to find clothing strung all over his living room floor. 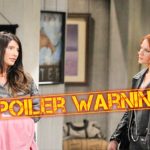 Days of Our Lives’ Ben tells Tripp (Lucas Adams) and Claire (Olivia Rose Keegan) that Ciara is missing. Tripp accuses Ben of kidnapping her; Ben says he didn’t. Claire hopes nothing is wrong with Ciara. Claire calls Hope to see if she has heard from Ciara.