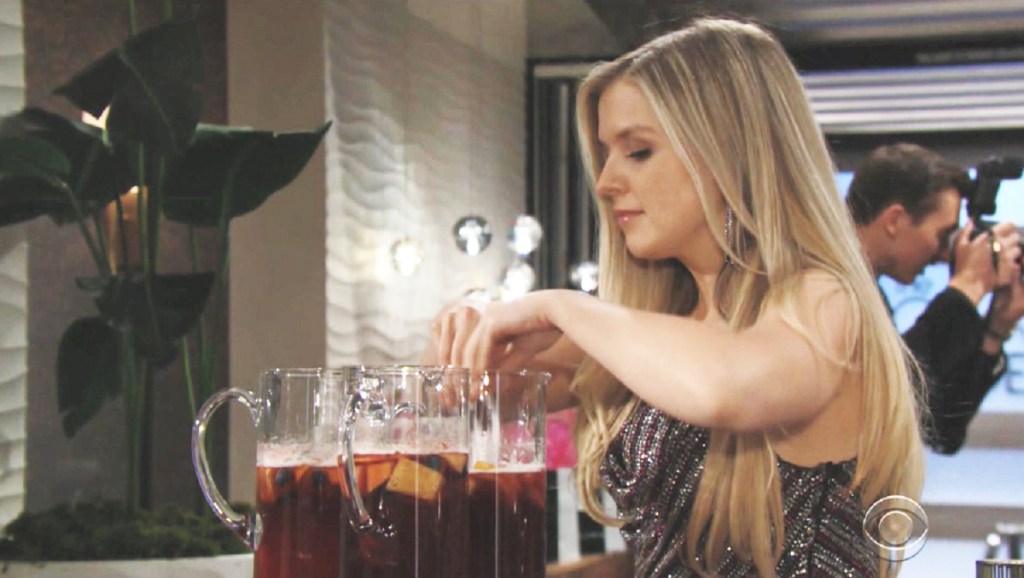 One main setting was used on ‘The Young and the Restless’ for The Grand Phoenix grand opening party. Differing from Y&R’s normal three-plus scene rotation that’s standard on most episodes, this particular show was able to present a steady view due to the number of characters who were present at the new hotel.

Young And The Restless Spoilers – Smile For The Camera, Zoe Hardisty

Hardisty has either been signed as a short-term player, with Zoe being arrested and hauled off to jail, or she’s staying. This is quite the start if the latter is the case.

Chief Paul Williams’ (Doug Davidson) arrival and his conversation with Detective Rey Rosales (Jordi Vilasuso) created dialogue that reflected savvy soap fan’s thoughts. That means security camera recordings would surely show Zoe openly dumping chemicals into the drink pitchers, unless angles were blocked. Although the writing staff could play that off as though Abby and Chelsea either didn’t check that box before the opening, or did and the equipment was faulty, or wasn’t working, thus letting Zoe off the hook.

Devon Hamilton (Bryton James) and Sharon Newman (Sharon Case) were in distress due to the illegal substances they unknowingly digested. James’ character suffered panic attacks earlier this year, stemming from the passing of his wife and unborn child.

Buzz indicates that Mishael Morgan (Hilary Hamilton) may be returning to the cast in the possible form of attorney Amber Sinclair. Considering the recent legal letter Devon received, regarding Katherine Chancellor’s (Jeanne Cooper) will, it’s plausible this situation will combine to produce Morgan’s return.

Clearly, Elena Dawson’s (Brytni Sarpy) world would be turned upside down, along with Devon’s if, in fact, Hilary’s look-a-like, or long lost family member will be in Genoa City, Wisconsin.

Case’s character has maintained a strict medicine protocol, which has allowed her bipolar issue to remain in check. Knowing that she takes prescription drugs, Rey was quick to call the station and seek medical help.

‘Shey’ was sharing both old and new feelings after they’d down some sangria. A positive that could result from this unexpected crisis could be a revival of Sharon and Rey’s relationship.

It would seem unlikely that Lola would be incensed by an obvious drug-inspired act on Summer’s part, along with the fact that Kyle wasn’t under the influence and quickly explained the circumstances. But Theo Vanderway (Tyler Johnson) has yet to fully play the Zoe card, which is at the heart of the tension between these men.

Fans of ‘The Young and the Restless’ rightfully express their opinions on a regular basis. So, what is the result of The Grand Phoenix disaster? Please vote in our poll below!