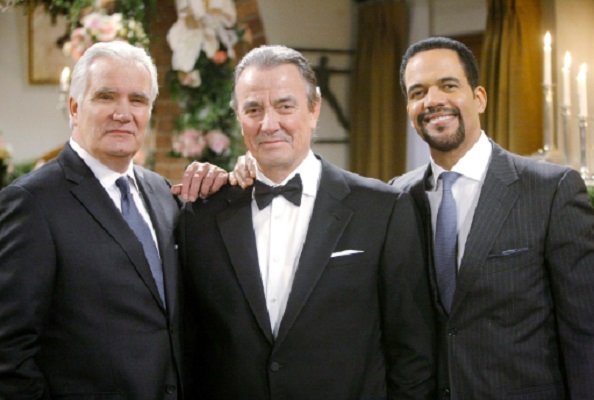 The Young And The Restless (Y&R) star Eric Braeden paid tribute to his friend and co-star Kristoff St. John, who was found dead at his home on Sunday at the age of 52.

“We worked together for nearly 30 years,” Braeden, who plays Victor Newman on Y&R, told The Daily Beast in an interview yesterday. “He was a wonderful actor, great to work with, bright and empathic.” He said the entire Y&R cast was “devastated” by the terrible news.

“Kristoff was more than a nice guy. People loved him. He was a fundamentally nice man, and always there for people. He was just a man with soul. This will have a deep effect on all of us.”

He also said he sat in his car yesterday as it rained outside, reading condolence tweets and “there were tears in my eyes.”

Braeden believes St. John never got over the death of his son Julian, who took his own life in 2014 while staying at a mental health center.

He remembered the memorial service for Julian and St. John’s eulogy to his son and how painful it was to watch.

“Those of us who have children ourselves, sons, can empathize, with a father in those shoes,” Braeden said. “It was almost unbearable. It was just…utterly painful to watch a devastated man.”

TMZ reported that St. John had checked himself into the UCLA Medical Center for depression in January and had been released a few days before his death.

“He was such a vital, strong character, and obviously haunted by demons,” Braeden said. “But he was so full of humor and he was such a good man. In lonely moments when you’re all by yourself, what goes through your head? Who knows?”

St. John, who played Neil Winters, had been off the Y&R canvas for a few months but had recently returned, much to the delight of fans, who hoped to see more of him onscreen in the future. Braeden commented that St. John was happy to be back on set but other cast members had noticed he had seemed quiet and a little depressed.

But how will the Y&R deal with the death of St. John on screen?

“It should be a hell of a tribute,” Braeden said. He talked about how the show was now in the capable hands of head writer Josh Griffith and Executive Producer Anthony Morina.

“Tony worked with Kristoff before and knew him longer than any of us. I have a feeling that Neil’s story will be in good hands.”