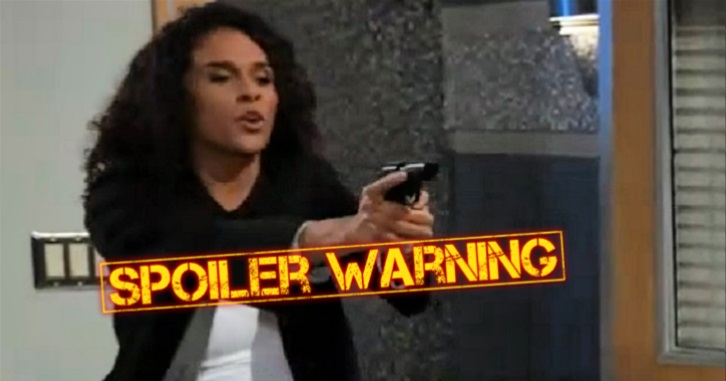 “General Hospital” spoilers for Wednesday, February 6, tease that Liesl Obrecht (Kathleen Gati) will get on Anna Devane’s (Finola Hughes) bad side. She’ll most likely make disparaging about Peter August (Wes Ramsey) and drop hints about stirring up more trouble. Of course, that isn’t going to work for Anna. She’ll make it clear that if Liesl dares to cross the line, Dr. O will end up dead.

Meanwhile, Peter and Maxie West (Kirsten Storms) will discuss Valentin Cassadine (James Patrick Stuart). “General Hospital” spoilers say Peter will remind Maxie of how untrustworthy Valentine is. He’ll suggest Valentin always lies if it gains him the upper hand. Peter will argue that Maxie needs to be careful around this schemer. The same goes for everyone else in Port Charles.

Nevertheless, Nina Reeves (Michelle Stafford) can’t help the love she feels for her ex-husband. She just told Sasha Gilmore (Sofia Mattsson) that Valentin asked her to marry him again, which seemed to worry Sasha. “General Hospital” spoilers say Nina will understand Sasha’s concerns, but she’ll argue that Valentin gave her child back to her. She’ll feel like that alone is worth her eternal gratitude.

Sasha may warn Nina to be cautious, but she’ll also cause a crucial change of heart. Nina wasn’t exactly ready to rush down the aisle, but maybe a wedding will be in the works after this chat. Sasha doesn’t care much for Valentin, but she wants her fake mom’s dreams to come true. Like it or not, Nina loves the guy! Sasha may encourage Nina to live the life she’s dreaming of.

For now, Valentin will get some disturbing news from Charlotte Cassadine’s (Scarlett Fernandez) teacher. Willow Tait (Katelyn MacMullen) will show up to fill Valentin in on a troubling situation, so he should fret about his daughter’s issues. At GH, Lulu Falconeri (Emme Rylan) will reel after her manipulated hypnosis session. She’ll tell Laura Webber (Genie Francis) that Franco Baldwin (Roger Howarth) tried to kill her.

Laura may wonder if Lulu is sure about that. She’ll hate the idea of Elizabeth Webber’s (Rebecca Herbst) world being completely shattered. However, Lulu will stick to her story and leave Laura with growing fears. Laura will definitely be concerned about Liz and her boys, but it seems Jordan Ashford (Briana Nicole Henry) will take swift action.

“General Hospital” spoilers state that Jordan will whip her gun out at GH. She’ll tell the person in front of her to freeze and put his or her hands where she can see them. Jordan may get all the proof she needs and give herself the green light on Franco’s arrest.

It looks like some shockers are looming in PC. We’ll give you updates as other details and rumors emerge. Stick with ABC’s GH and don’t forget to check Soap Opera Spy often for the latest “General Hospital” spoilers, rumors, updates and news.