The Young and the Restless prompt for the week of August 5th thru August 9th indicate that Sharon Newman (Sharon Case) and Adam Newman (Mark Grossman) share a passionate night together, while Mariah Copeland has to diffuse a situation at Kyle Abbott’s (Michael Mealor) bachelor party.

The tension between brothers Nick Newman (Joshua Morrow) and Adam reaches its peak this week. Nick is furious when Adam tells Christian Newman (Jude and Ozzy McGuigen) that he’s the boy’s biological father. The two have a confrontation which results in Nick punching Adam.

While Adam is nursing an bruise following Nick’s attack, he’ll have Sharon to lean on. The two exes have reconnected since Adam returned, and it looks like their friendship is taking a romantic turn.

Young And The Restless Spoilers – Wants To Be With Sharon Newman

Sharon recently broke up with her boyfriend Rey Rosales (Jordi Vilasuso) because of her unresolved feelings for Adam. As for Adam, he’s finally realized that there’s no hope for a reunion between him and his ex-wife Chelsea Lawson (Melissa Claire Egan) since she’s moved on with Nick. 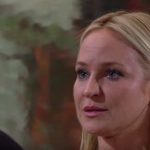 Young And The Restless Weekly Spoilers August 5 to August 9: Anita Returns With Connor – Sharon And Adam’s Spark Is Lit

With Chelsea out of the picture, Adam will finally realize that Sharon is the love of his life. It’s her that he wants to be with. Things heat up for the couple and before too long they’re taking off their clothes and hitting the sheets. It will no doubt be a hot week for Shadam fans.

Things between Kyle and Lola Rosales (Sasha Calle) have been tense as they plan their upcoming wedding. Mariah decides to take their mind off things by planning an engagment party. Friends and family gather on the rooftop to join in the pre-wedding festivities. However, what’s supposed to be a fun night soon turns dramatic.

Summer Newman (Hunter King) and Abby Newman (Melissa Ordway) get into an argument. Summer makes jabs at Abby’s new boyfriend Nate Hastings (Sean Dominic) and makes a comment about Abby not being able to keep a man. A catfight ensues between the two women, which Mariah tries to break up. At one point during the fight, Summer dumps a bucket of ice water on Abby.

While Mariah is dealing with Summer and Abby’s fight, Kyle has some drama he needs to diffuse. His friend Theo Vanderway (Tyler Johnson) has been causing problems for Kyle and Lola. Theo hinted that Kyle used to be a party boy and something happened in New York to get Mr. Abbott in trouble.

Hearing about Kyle’s past brought concern from Lola’s mother Celeste Rosales (Eva LaRue), and is one of the reasons she won’t be at the wedding. Lola has also inquired about Kyle’s past, and he’s assured her that’s he changed. With Theo holding the secret over his head, Kyle issues a warning to Theo to keep his mouth shut about New York.

Young and the Restless (YR) Spoilers: Victor Newman Is Not The Man We Used To Know – Unexpected Ally Emerges