Young And The Restless Weekly Spoilers August 5 to August 9: Anita Returns With Connor – Sharon And Adam’s Spark Is Lit 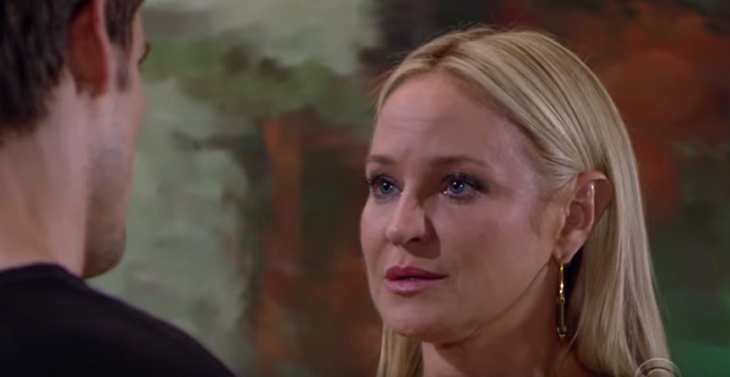 Has Anita come back to Y&R’s Genoa City hoping to cash in on Chelsea’s late husband Calvin Boudreau’s (John Burke) $5 million pay-out to his wife? After all, Chelsea did tell Nick Anita was involved with Calvin first.

Maybe she thinks she deserves some cold, hard cash as a finder’s fee. Chelsea will be happy to see her mom at first, but she’ll be concerned that Adam will want to see Connor, when he catches wind that his son is in town.

Young And The Restless Weekly Spoilers – Shadam Relationship Heats Up

Speaking of Adam, rumor has it he will be too focused on Christian to worry about Connor for the time being. In fact, spoilers indicate he will begin to tell Christian he is his real father at Y&R’s Chancellor Park. Nick will witness this and is going to be furious, leading to a standoff of epic proportions between the brothers. Nick will punch Adam twice and Sharon Newman (Sharon Case) will see it. She’ll break it up and defend Adam, which will anger Nick even further.

Later in the week, sparks will fly between Sharon and Adam and spoilers tease that, despite everyone’s advice that she stay away from him, Sharon will do just the opposite and hit the sheets with Adam. A video preview shows their scenes together will be smoking hot!

Meanwhile, the engagement party Mariah Copeland (Camryn Grimes) throws for Kola will not go according to plan. When does any party ever end peacefully on Y&R? She’s been one of Kyle and Lola’s biggest cheerleaders but Abby Newman (Melissa Ordway) will feel put out that Mariah organized it. Abby is maid of honor after all.

Not only will there be an awkward moment between Sharon and Rey Rosales (Jordi Vilasuso), but Kyle will be furious when Summer Newman (Hunter King) shows up with Theo Vanderway (Tyler Johnson) on her arm. Rumor has it, Theo will make a toast to the groom in which he will hint at his past and Kyle will hit the roof.

But Kyle will not be the only angry party guest. Other rumors indicate Abby and Summer will get into a fist fight and a brawl will break out. Will Mariah have to break it up? It’s certainly going to change Nate Hasting’s (Sean Dominic) opinion of his sweet, generous Abby.

And finally, other spoilers tease that Nikki Newman (Melody Thomas Scott) will be unbendable, Jack will take matters into his own hands and Billy Abbott (Jason Thompson) will continue to be haunted by Delia. With Theo constantly threatening Kyle, will he soon reveal whatever deep, dark secret Kyle is desperately hiding from Lola?