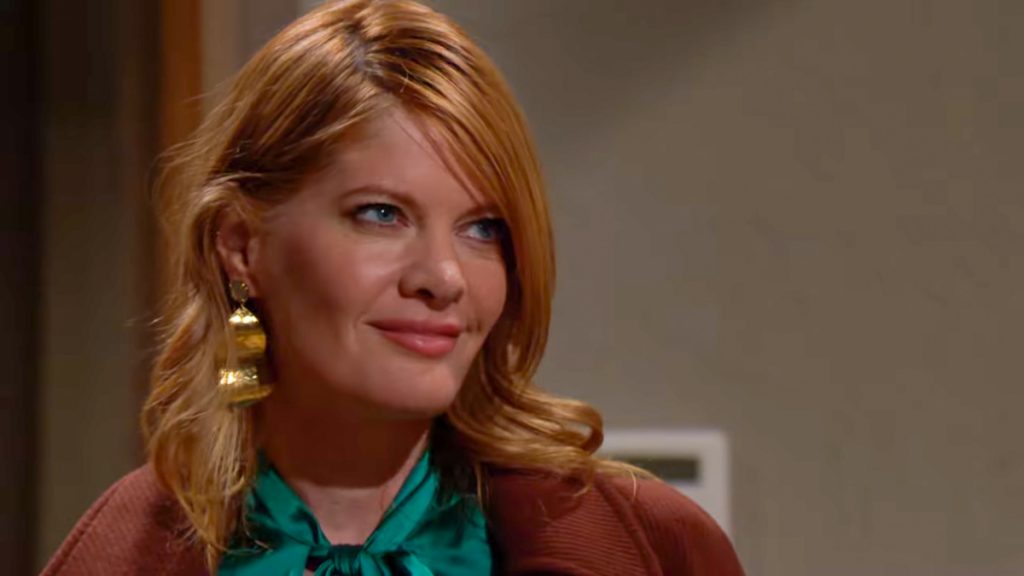 Phyllis Summers (Michelle Stafford) is up to her old flirtatious tricks as she tries to take advantage of Nick Newman (Joshua Morrow) and his girlfriend Chelsea Lawson’s (Melissa Claire Egan) moving in with Adam Newman (Mark Grossman) and possibly misunderstanding the situation.

Phyllis may be assuming that Nick is single again, since she probably doesn’t know that the reason Chelsea has moved in with Adam is because of their son Connor Newman (Judah Mackey) having been traumatized by the hostage situation at the Grand Phoenix, and she is there for him so he and Adam can support their son emotionally together, not because she has moved out on Nick because they have broken up! Phyllis comes onto Nick – flirtatiously telling him that they are two consenting adults and that leaves it open! As longtime Y & R viewers will recall, Phyllis and Nick were married before and have an adult daughter, Summer Newman (Hunter King).

At the Grand Phoenix, Abby Newman (Melissa Ordway) asks Chance Chancellor (Donny Boaz) what he wanted to talk to her about. Y & R viewers will remember a scene a few days ago after Chance handled the hostage crisis at the Grand Phoenix and took down Simon Black (Jeffrey Vincent Parise) and Chance and Abby had a rather flirtatious little conversation with one another – or at least it was on Abby’s part! Chance had told her he had something to talk to her about but then had to go away and handle something important to do with work.

Chance returns to the Grand Phoenix and Abby gets his attention and wants to know what he wanted the other day. Chance tells her that he has an offer to make her. However, it may not be exactly the offer that Abby may be hoping it is! Perceptive viewers may have picked up on a little attraction on Abby’s part, and Chance’s responses towards her could have easily been misread – or were they? Time will tell, and Y & R viewers will have to tune in!

Jill Abbott Atkinson (Jess Walton) who flew to the Maldives to look for Colin Atkinson (Tristan Rogers) in a hotel the two of them had planned to spend time in and didn’t get around to, and where he has been known to stay, hits pay dirt! Y & R viewers will recall that after discussing the challenge to Katherine Chancellor’s (Jeanne Cooper) will with her stepson and his son Cane Ashby (Daniel Goddard) after he returned from Las Vegas with the two pages naming him as heir, which were later authenticated, Jill had recognized a logo on the envelope they had been in as belonging to this certain hotel.

She then made plans to fly over to see if she could track the old rascal down because she and Cane agreed that this challenge to the will had perfectly fit a scam that Colin would pull all over it! She enters the room with elegant decorating and expensive appointments including a huge bed and shouts out, “Come out, come out, wherever you are!” Colin comes out with two glasses of champagne, his old cocky self, and calls her his fetching, fiery mate and asks her what took her so long!