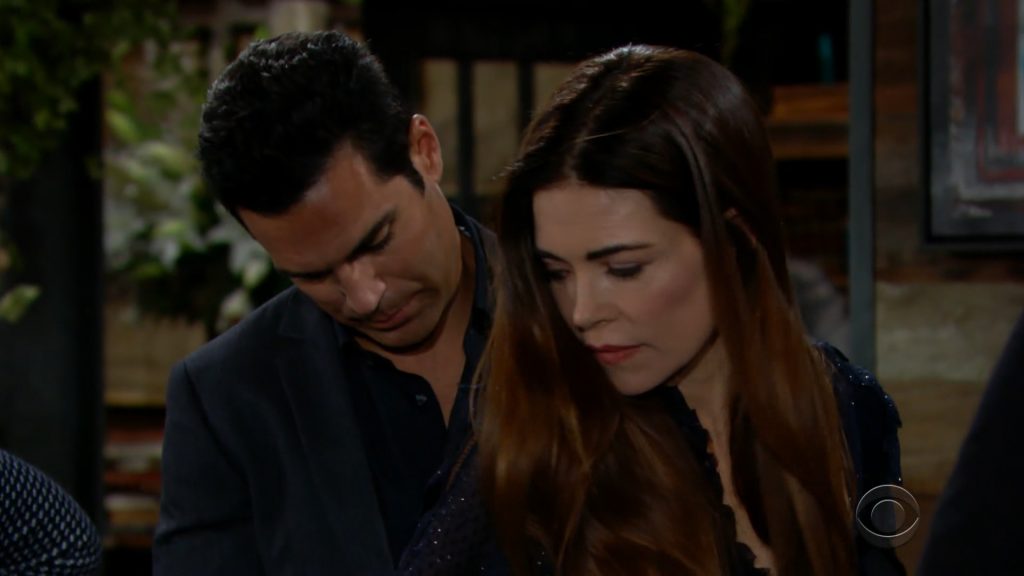 The Young and The Restless spoilers tease that Billy Abbott (Jason Thompson) will rescue Amanda Sinclair (Mishael Morgan) from a drunk, Nick Newman (Joshua Morrow) will start to take Chelsea Lawson’s (Melissa Claire Egan) attempts to help her son Connor Newman (Judah Mackey) the wrong way, and Rey Rosales (Jordi Vilasuso) and Victoria Newman (Amelia Heinle) will be left in the dark this week on The Young and The Restless!

At an out of the way bar, Amanda stands by a jukebox when a drunk comes up and starts harassing her, as Billy looks on. Amanda is quite annoyed by the drunk and tells him, “Why don’t you go back to your drink, or better yet, outside – get some fresh air, clear your head?” The drunk becomes surly and snarky and sasses back at her, saying “And what if I don’t?” Billy then interrupts, and tells him if he doesn’t “Then we will all stop being polite!” Billy had gone by this out of the way dive to be by himself, feeling like he is suffering an identity crisis of sorts after resigning at Jabot and having no corporate job to go to after doing the corporate thing for so long.

He is a bit taken aback at Amanda’s resemblance to Hilary Hamilton (Mishael Morgan) but after the shock of that is gone, the two start talking and Billy feels very comfortable with her. He really enjoys himself talking to someone that doesn’t put him on the spot like his therapist does, and she seems to enjoy his company as well – and definitely his intervention with rescuing her from the drunk!

Y & R viewers will recall from a recent episode that Adam Newman (Mark Grossman) had suggested that she move in for a while so that Connor Newman (Judah Mackey) can feel safer, after being traumatized by the hostage incident.

Connor definitely feels safer with both of his parents with him, and even though she tells Nick that Connor needs her, he is thinking Connor wants to get his parents back together for good, and has an attitude with Chelsea, asking who needs her – Adam or Connor? He thinks Adam is encouraging Connor with the idea of his parents reconciling and thinks it’s more Adam than it is Connor’s doing!

The Young and the Restless Spoilers: Adam Stuck In The Middle Between Chelsea And Sharon Again https://t.co/lvXXXzXUYs pic.twitter.com/ibZFDtvUwb

Y&R Spoilers: Rey Rosales And Victoria Newman Are Left In The Dark

At the CEO office of Newman Enterprises, Rey Rosales (Jordi Vilasuso) has dropped by and he and Victoria Newman (Amelia Heinle) are talking about the storm that is building up in Genoa City. She asks him how bad it is out there, and he responds, saying, “It is pretty nasty. The wind’s already knocked down a few trees, and they’re expecting it to get even worse tonight.”

Suddenly, the lights go out and the room goes dark, and Victoria stands up, asking, “What happened?” It sounds like a power outage just happened due to trees falling and knocking down power lines! Rey and Victoria are left in the dark and will probably have to stay in her office to ride out the storm!

Young And The Restless Spoilers: Billy Is Stranded Overnight With Amanda, Will Victoria Be Jealous?