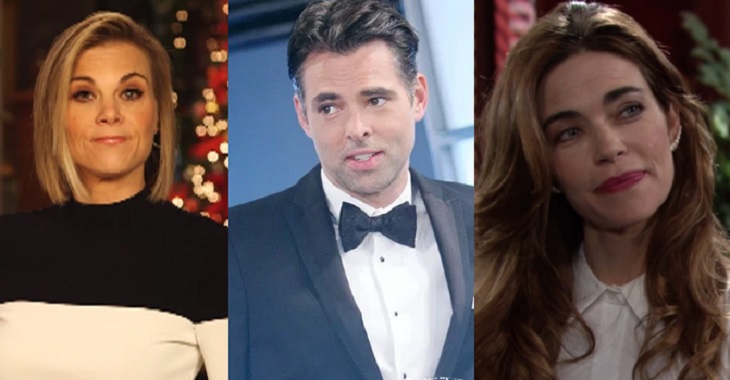 Billy (Jason Thompson) has been tied to both women on ‘The Young and the Restless’. His romances with Vickie (Amelia Heinle) were epic and further chapters could be written. Billy’s link to Phyllis (Gina Tognoni) isn’t nearly as long, but there’s no doubt that chemistry still exists.

‘Villy’ verses ‘Philly’. Now there’s a choice countless Genoa City bachelors wish they had. Yes, Billy is a fortunate man. But would someone who’s life has seemingly been handed to him truly appreciate what either lady offers?

Savvy Y&R fans know that Vickie hasn’t exhibited any strong signs that she’s looking to reconcile with Billy. However, she’s the mother of his daughter, Katie (Sienna Mercuri), and the adoptive mother of his son, Johnny (Ryan and Holden Hare), through Chelsea (Melissa Claire Egan).

Phyllis appeared to have already moved on, or back, to Nick (Joshua Morrow). However, Mr. Newman’s feelings for Sharon (Sharon Case) haven’t abated. How could they, as ‘Shick’ was standing at the altar, about to be married until Sharon dropped the revived ‘Phick’ news on everyone’s heads.

The in-wedding marriage proposal that Phyllis accepted from Billy was instantly off. That proposed engagement was clocked at somewhere under three minutes.

In recent weeks Phyllis has seen that Nick’s heart isn’t fully open to her, which makes Billy a viable player again. Vickie will not like that development, making ‘Villy’ a far more likely couple’s choice than it has been in awhile.

For his part, Billy has never stopped loving Vickie. He’s realized that Miss Newman doesn’t feel as passionately toward him as she once did. His erratic nature and repeated let-downs are part of this emotional mix.

Young And The Restless Spoilers – Phyllis or Victoria?

Yet, Victoria hasn’t been dating because of what happened with J.T. (Thad Luckinbill). It’s understandable that she’s not worked past that situation yet, though Billy could easily rush in to help if he learns the plot particulars. And with that become a renewed interest.

Phyllis, or Victoria? Two impressive women, each of whom enhanced Billy’s life in different ways and could do so again.