The Young and the Restless (Y&R) fans love the drama that Adam Newman’s (Mark Grossman) return brought to the storylines. Although, as CBS Soaps In Depth points out, there were several flaws in the storylines, especially with Adam’s feud with Nick Newman (Joshua Morrow).

As the fans recall, when Adam supposedly died in the cabin explosion, Nick and Adam were on good terms. Y&R spoilers state that Adam asked Nick to look after his family and to take good care of Connor. Of course, he didn’t tell him, at that time, that Christian Newman (Tobias twins) was his son. Chelsea did that in her goodbye letter to Nick a year later.

One good thing the writing team has implemented is they brought up some of the ugly history between Adam and Nick. For years, the writers have ignored the fact that Adam stole Faith Newman (Alyvia Alyn Lind) when she was born, gave her to Ashley Abbott (Eileen Davidson) and told Sharon Newman (Sharon Case) her baby died. And, to make matter worse, Sharon fell head of heels in love with him after she discovered the truth. 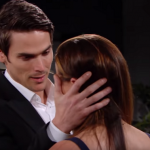 This all came out last week when Rey Rosales (Jordi Vilasuso) was stunned to find out some of the history between the brothers. Sharon admitted to Rey that they have a complicated history.

“It is strange that the writers had Sharon completely forgive Adam for basically kidnapping her child. Then, forgiveness wasn’t enough. They upped the ante and they had her completely fall in love with him,” Case said.

Chelsea’s got some explaining to do (i.e. why she knocked Sharon unconscious before she left town last year😬🙊) #SorrySharon #ItsNotYouItsMe #YR @sharonlcase @YRInsider pic.twitter.com/QYYaZEjwdw

“They have a very strange connection,” Sharon added.

Y&R Fans Do Not Want Sharon With Adam

A strange connection is right. Even though she is happy with Rey, Sharon cannot help but want to be close to Adam too. And, Case teased that it’s only going to get worse in the weeks ahead.

It sounds like Sharon is on the road to destroying her relationship with Rey. Most Y&R fans are okay with that though as since Mia Rosales (Noemi Gonzalez) left town, Rey’s been kind of a snooze fest.

Do you think Sharon should steer clear of Adam? Do you think they will end up hitting the sheets soon?

The Young and the Restless Spoilers: Will Mariah Ever Forgive Tessa For Cheating On…