Nina is upset that Jax is giving her such a narrow berth to operate in, and she wants more decision-making allowances and greater autonomy with Crimson like she had before Jax invaded her life and business! Nina tells Jax in no uncertain terms, “You’re going to need to give me plenty of room!”

In other words, Nina is at least trying to be diplomatic instead of reaming Jax out, but what she’s really telling him between the lines is BACK OFF! 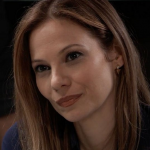 Elsewhere, Sasha Gilmore (Sofia Mattsson), who has been getting closer to Michael Corinthos (Chad Duell), tells Valentin Cassadine (James Patrick Stuart) that she has made an important decision; she has decided to stay in Port Charles for good! Valentin doesn’t appear to be too pleased with Sasha’s decision, but there’s really not a lot he can do about it; like Nina, when she’s made up her mind, it’s made up!

The consequences of Julian's actions are much worse than he could've imagined. What hope do Brad and Lucas have now?
A fiery #GH STARTS NOW on ABC! @WilliamdeVry1 @NancyLeeGrahn pic.twitter.com/0jfUJSfowW

Meanwhile, a frantic Brad Cooper (Parry Shen) is fearful for he and Lucas Jones’ (Ryan Carnes) adoption status regarding baby Wiley Cooper-Jones (Eric and Theodore); he’s ready to cut and run as he tells Lucas their best chance of keeping Wiley is to take him and run away from Port Charles! Unfortunately, the only way they could legally do that is to go in the Witness Protection Program like Lucas’ dad Julian Jerome (William DeVry) did years ago; but that’s by invitation only and they don’t have an invitation!

Elsewhere, Michael visits Willow Tait (Katelyn MacMullen) in the Port Charles Police Department jail’s visiting room, as he updates her with the information obtained about her father, Douglas Miller; he tells her that he didn’t commit suicide; he was murdered!

Sam's not the only one eager to tell Shiloh off, West Coast. But once they start, how easy will it be to stop?
Tune into a dramatic, new #GH – STARTING NOW on ABC! @kellymonaco1 pic.twitter.com/cjkkI9ZoAf

Meanwhile, a desperate Kim Nero (Tamara Braun) pleads with Shiloh Archer (Coby Ryan McLaughlin) for him to help her bring Oscar back; is she asking him what General Hospital fans are hoping she’s not – to make a baby with her?

At General Hospital, Sonny Corinthos (Maurice Benard) and Carly Corinthos (Laura Wright) appear to be in the ob/gyn department with Carly having an ultrasound; Carly is fearful and nearly in tears, as she asks if something is wrong with their baby!