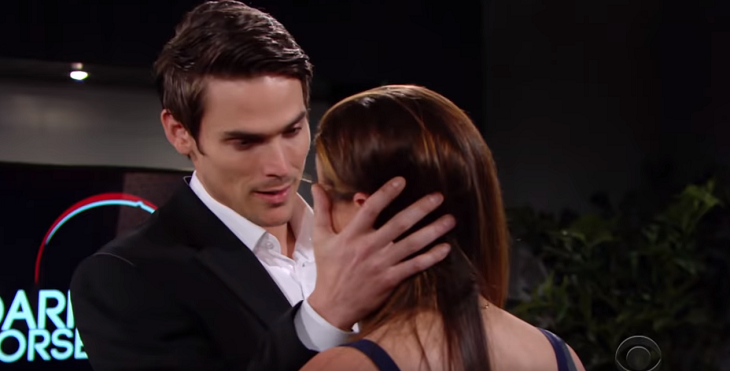 The Young and the Restless (Y&R) spoilers tease that Adam Newman (Mark Grossman) will finally get a visit from his true love. Chelsea Newman (Melissa Claire Egan) will return to Y&R starting June 28, and she’ll have big plans to pull off. Nick Newman (Joshua Morrow) got in touch with Chelsea about Adam going after full custody of Christian Newman (Jude and Ozzy McGuigen) and offered a warning.

Adam has made it crystal clear that he won’t let anyone stand in his way. When he wants something, Adam takes it by force. He’s willing to play dirty, even if it hurts people he cares about.

Adam would like to reunite with Chelsea and Connor Newman (Gunner and Ryder Gadbois), but Chelsea told Sharon she had remarried. She claimed her new husband adopted Connor as well.

Since Chelsea hasn’t been willing to cooperate, that makes her vulnerable to Adam’s shady tactics. Nick insisted Adam could go after Connor next, so Chelsea’s visit should be an attempt to stop him.

Chelsea certainly doesn’t want Adam to sue for full custody and blow up the kid’s life. It’d blow up her own life as well, so Chelsea will hope they can reach an agreement. The Young and the Restless spoilers say Chelsea will deliver a stern ultimatum during the week of July 1-5. She’ll give Adam a choice and insist that he’d be wise to make the right one.

Perhaps Chelsea will offer visitation with Connor. She might suggest that Adam can get to know his son again but on one condition. Chelsea could go to bat for Nick and contend that Adam should drop his fight for Christian. She may remind Adam that he once wanted Nick to raise the boy and urge him to honor his own previous wishes. Chelsea may think Connor should be enough for Adam.

If Adam refuses, Chelsea might have a few tricks up her sleeve. She can be pretty manipulative as well, so Adam really shouldn’t test her. If Chelsea indeed has a new husband as she claims, he could be trouble, too. Chelsea may argue that they’ll unleash backlash like Adam’s never seen if he doesn’t cooperate. If Adam keeps up his Christian battle and seeks custody of Connor, he could regret it.

Of course, Adam should find himself in a tight spot. He may think he can win Chelsea back if he plays this right, but he won’t want to ditch his Christian pursuit. The Young and the Restless spoilers say Adam will have to resort to some sneaky maneuvers and hope he gets everything he wants.