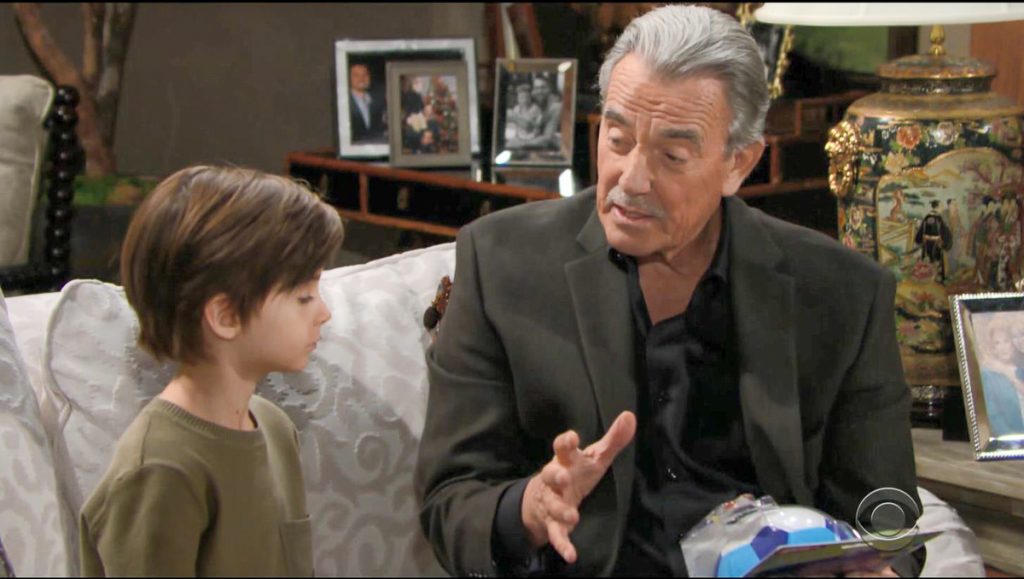 Adam and Nick Newman (Joshua Morrow) arrived back in Genoa City and go to Nick’s place where a tearful Chelsea Lawson (Melissa Claire Egan) tells them about Connor’s accident. Before Adam can see Connor, Chelsea lays down some ground rules. Adam goes into the boy’s room to see Connor asleep, but he wakes up and is overjoyed to see his dad. Adam tells Connor that he loves him and apologizes for leaving. Adam says he was wrong to believe that Connor would be better without him. Adam promises not to leave ever again and to be a better father to Connor.

When Connor asks if he can live with Adam, he says he’ll have to talk it over with his mom. Chelsea agrees to the new living arrangement and Connor starts to pack his stuff. Nick isn’t thrilled with the idea and Chelsea says it’s only temporary. After Adam leaves, the couple talks about the boy’s new living arrangement. Nick says he doesn’t agree with it, but if Chelsea thinks it’s for the best he’ll support her. Once Connor has his things packed, she makes him say goodbye to Nick then goes alone to drop him off at Adam’s place.

After Chelsea drops Connor off, she comes home and tells Nick the reason she let Connor live with Adam is because she was afraid she would’ve lost her son. Nick comforts her as she becomes emotional.

Phyllis Summers (Michelle Stafford) is at Adam’s penthouse. She’s on the computer spying on what’s going on at the Grand Phoenix. When Adam arrives, he says that Connor is moving in with him and Phyllis will have to find a new place. Phyllis is surprised that Connor is going to be living with him, but says that she’s thrilled for Adam.

She also reminds him that she’s his only friend. As Adam prepares for Connor’s arrival, she tells Adam that the boy thinks the world of him. When Chelsea and Connor arrive, Phyllis makes small talk, then leaves. Connor goes upstairs to check out his room, and Adam promises to do right by Connor and make sure the boy follows the rules. After Chelsea leaves, Adam and Connor play video games. Adam tells his son that he loves him and they’ll be inseparable. He then signs a heartfelt message on Connor’s cast.

Later Phyllis arrives at the Grand Phoenix and meets Amanda Sinclair (Mishel Morgan). She greets Amanda by saying that they’ll be neighbors.

Cane and Jill are at the Grand Phoenix talking when they spot Amanda. The debate on whether to tell Amanda what they learned about the will, then agree not to tell her. Jill calls Devon to discuss the will, but he says he doesn’t want to talk. Devon then hangs up when Jill says they have proof the will is false. They say Devon has a tough choice to make and later Jill receives a text from Devon saying they need to talk.

Elena Dawson (Brytni Sarpy) is at Crimson Lights with Nate Hastings (Sean Dominic) talking about work. She says she’s been working a lot at the hospital to avoid going home because the will situation is stressing Devon. Later they get a text from Devon and leave.

Jill and Cane arrive at the penthouse and see that Devon’s invited Amanda. Jill again brings up how she doesn’t think Amanda and Chance Chancellor (John Driscoll) are working together. Devon asks to see Jill’s proof and Cane hands him the forensics report. Amanda says she was telling the truth all along and demands an apology. Jill and Cane bring up how much Katherine Chancellor (Jeanne Cooper) loved Devon and it’s up to him what to do with the money. The two leave, then Elena and Nate arrive. A frustrated Devon tells them about the will, and it’s unfair she left the money to Cane. Now that Devon knows the truth he’s confused about what to do.

After their meeting with Devon, Jill and Cane stop by Crimson Lights. They discuss what Devon will do and if he refuses to give the money up, will Cane drop the issue.

Mariah Copeland (Camryn Grimes) comes into Crimson Lights and talks with Sharon about work. Mariah is excited about the new artist she signed. She then switches to the topic to how unhappy Sharon looks. Mariah asks about Sharon and Rey’s relationship, and Sharon says it’s been a while since she heard from him.

Rey arrives at the coffee house and interrupts their conversation, Mariah leaves so he and Sharon can talk in private. Sharon asks if Rey’s still interested in another date and he says yes. They start to make plans for a date when he leaves to answer a call. Mariah returns to the table and Sharon fills her in on Rey asking her on another date. Mariah is happy and feels that the two have a second chance at happiness.

Days of Our Lives Spoilers: Princess Gina Out Of Her Mind – Can Hope Brady Later Do Damage Control?

The Bold and the Beautiful Spoilers: Hope Gains Douglas But Loses Liam