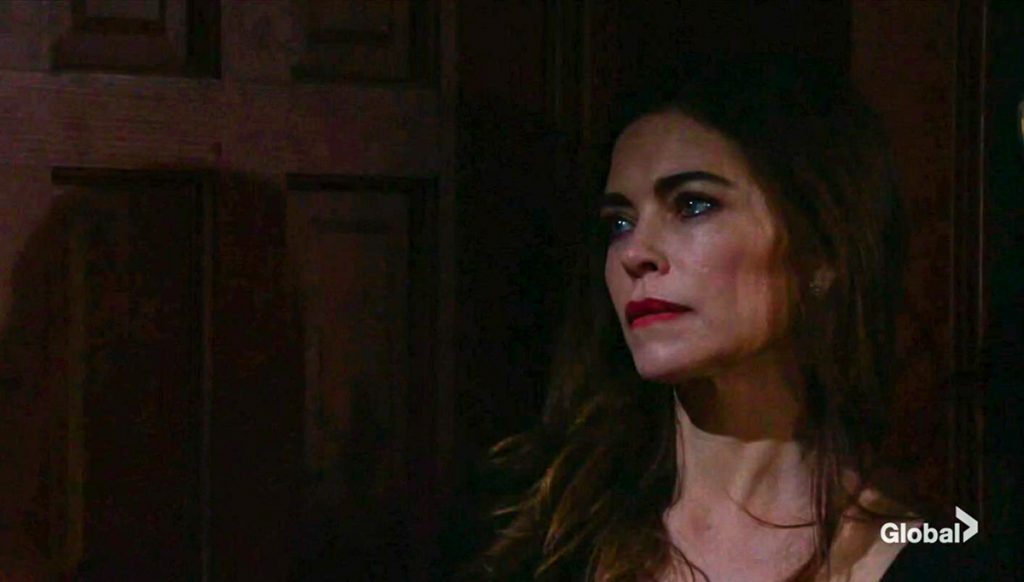 The Young and the Restless (Y&R) spoilers for Tuesday, December 3, tease that a storm will bring some close moments in Genoa City. At the dive bar, Amanda Sinclair (Mishael Morgan) and Billy Abbott (Jason Thompson) get some weather updates on their phones. They eventually settle in to ride out the storm, which kicks the power off. It gives Amanda a chance to question Billy about seeming lost.

Billy confesses he’s taken some wrong turns in his life. He suggests he likes being anonymous there, so Amanda thinks they both came to the right place. Billy talks about feeling like he’s playing a role sometimes; it’s almost like he’s an actor in a play. Amanda wonders what makes Billy happy, but he doesn’t seem sure about that.

At Nick Newman’s (Joshua Morrow) house, Phyllis Summers (Michelle Stafford) shows up ranting about Chelsea Lawson (Melissa Claire Egan). She’s eager to give Chelsea an earful as usual, but Nick says it’ll have to wait since Chelsea’s not there. After Nick reveals that Chelsea’s at Adam Newman’s (Mark Grossman) penthouse, Phyllis suggests Chelsea might as well move in there.

Nick’s glum about the comment, and ultimately starts bickering with Phyllis. She’s about to leave, but he doesn’t think she should go out in the storm. They wind up playing videogames and reflecting a bit. Nick asks if Phyllis really believes he’s always judging her, so she admits she’s the only one who doesn’t seem to get his forgiveness.

Phyllis and Nick talk about how well they know each other, which involves revealing both positive and negative qualities. Nick’s smile melts hearts, but he’s got a temper and terrible jokes. Phyllis feels like Nick’s got a good heart despite his inner battle with being a Newman.

Nick mentions how Sharon loves a good insult and is proud to stand alone. However, Phyllis doesn’t like to see Summer Newman’s (Hunter King) in pain. There’s a softer side underneath Phyllis’ hard exterior. Nick argues that Phyllis is a fighter, and she’s touched that someone really gets her.

At Adam’s penthouse, he’s annoyed that Nick feels like he’d use Connor Newman’s (Judah Mackey) struggles to get Chelsea into bed. They’re debating Nick’s lack of trust when the lights go off. Connor’s scared, so they do their best to calm the kid down and get him back into bed.

Later, Adam and Chelsea share some close moments. They talk about when Connor was a baby and how Adam dreamed about their future. After Adam wonders how they got here, Chelsea confesses her fears about Connor. She feels stuck, but Adam worries his dark side led to the boy’s issues.

Adam just wanted to be a better dad than Victor Newman (Eric Braeden) was, and Chelsea feels he’s achieved that. Connor adores his father and views him as a hero. Chelsea also points out that she sometimes thinks about what might’ve been…

At Newman Enterprises, Victoria Newman (Amelia Heinle) gets a visit from Rey Rosales (Jordi Vilasuso). He’s there to offer the latest news on a Newman warehouse theft. They discuss the awful weather before the power goes out. Once Rey and Victoria realize they’re stuck in the office, they notify maintenance and try to jimmy the lock.

Young And The Restless Spoilers: Rey Rosales Uses Many Attempts To Escape The Office

Rey uses a paperclip in the first attempt, which leads Victoria to point out that he’s handy. He tells he a story to back up that idea and apologizes for arresting Victoria during the tampered meds chaos. Victoria ends up taking off her high heel and using it to help open the door. They’ve surprised each other since Victoria finds Rey funny and he finds her cool.

Back at Nick’s place, Phyllis wonders if he ever thinks of them together. Nick admits he does and suggests that when their relationship worked, it was intense and special. Just as Phyllis is about to reach out and touch Nick, the lights return and she pulls away. They say their goodnights, but Nick’s grateful for the trip down memory lane. As Phyllis heads out, Nick gazes at her deep in thought.

The lights also come back on at Adam’s penthouse, but he lowers them again and gazes at sleeping Chelsea on the couch. Adam leans down to move a strand of hair off Chelsea’s face and brushes it behind her ear. At the dive bar again, the power returns and Billy prepares to leave. He suggests that if Amanda finds herself with another storm to ride out, she should look him up. Amanda contends that she just might.

Afterward, Billy finds Victoria back at their place and tells her he’s glad to be home. The Young and the Restless spoilers say more trouble could be brewing for “Villy,” so expect some twist and turns. We’ll give you updates as other Y&R news and rumors emerge. Stay tuned to see what else is coming up on the CBS soap.