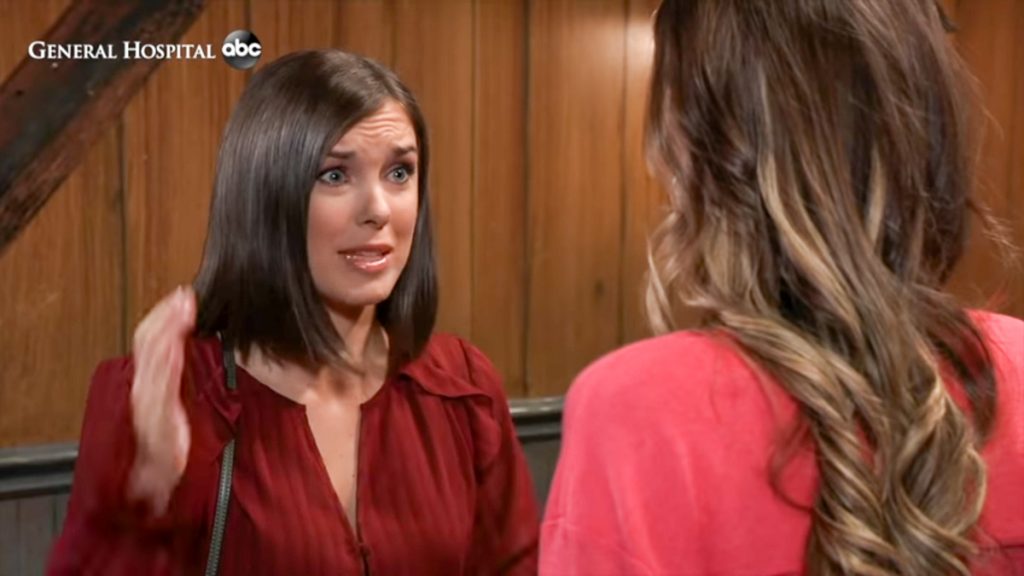 Welcome to your Tuesday, December 3rd General Hospital (GH) recap! We begin our day in Brad Cooper (Parry Shen) and Lucas Jones’ (Ryan Carnes) car where the brakes have failed. Kendra has dragged Alexis Davis (Nancy Lee Grahn) into the road and is about to run her over when Lucas drives right into the side of her car.

At General Hospital (GH), Neil Byrne (Joe Flanigan) and Julian Jerome (William DeVry) are still wondering where Alexis is. They figured out that Kendra is Kiefer’s sister.

In their bed, Jordan Ashford (Brianne Nicole Henry) is apologizing to Curtis Ashford (Donnell Turner) for not doing a traditional Thanksgiving. He says its totally okay after the busy year that they have had, he gives her a gift of their wedding vows on paper.

At General Hospital (GH) , Willow Tait (Katelyn Macmullen) is reading a pamphlet on new mothers. She flashes back to when Sasha hinted that she could be with child. Her boyfriend Harrison Chase (Josh Swickard) arrives with a turkey sandwich for her, he asks if she is okay.

Chase says that her working with children is special and she will be a great mother someday. Chase gets a call from the precinct and has to take off. Willow calls Sasha for support about the possible pregnancy.

Carly Corinthos (Laura Wright) walks into the living room and tells Sonny Corinthos (Maurice Bernard) that all three babies are asleep. Just as they are about to kiss, the doorbell rings and its Jasper Jax (Ingo Rademacher). Jax strolls in and says he is there to wish his daughter Josslyn a happy Thanksgiving.

Sonny lays into Jax about his secret “houseguest” – it must be pretty serious.

Alexis Davis (Nancy Lee Grahn) climbs up off the ground and has averted being hit by Kendra’s car. We see Brad Cooper (Parry Shen) and Lucas Jones (Ryan Carnes) passed out in their smashed car a few feet away. Alexis struggles over to the car which is smoking and she sees a passed out Kendra, who suddenly awakens.
Julian and Neil arrive to save Alexis and they find Kendra has died. Julian makes its to Brad’s crashed car and realizes that his son Lucas is in the car as well.

At General Hospital (GH) Kristina Davis (Lexi Ainsworth) has arrived and asks Julian and Neil what’s going on. They explain that they figured out Kendra is the one who poisoned her mom. Kristina uses a tracking app to tell them the exact location of her mom.

In bed they reflect on the past year and everything they endured. Curtis promises they will go on the honeymoon that he promised. Jordan gets a call about the crash and rushes out to help.

Sonny arrives at the hospital to comfort Kristina and she explains what happened to Alexis. Julian runs to Chase and Jordan and asks for help to get his son out of the car. Brad and Lucas are brought into the hospital both with very serious injuries. Alexis is brought to the hospital and is given a battery of tests. Jordan investigates the crash site and is surprised to not see any skid marks from Brad’s car…….flash to preview