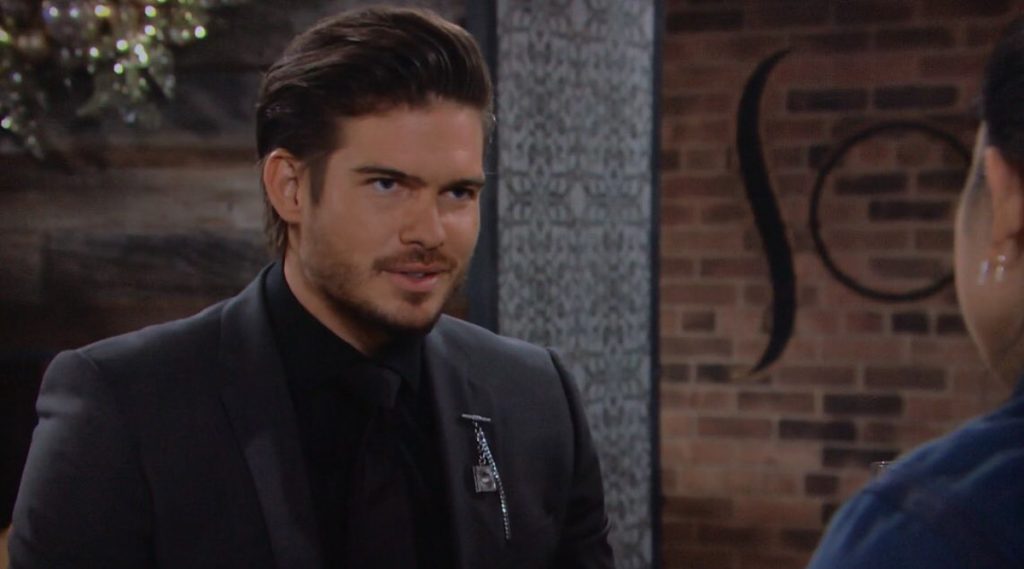 The Young and the Restless (Y&R) spoilers for Wednesday, December 18, tease that Theo Vanderway (Tyler Johnson) is in for a shock. At Jabot, Kyle Abbott (Michael Mealor) insists he missed the meeting for his first big deal. It was today, not tomorrow. Theo’s baffled as to how this happened and gets on the phone to smooth things over.

Later, Theo confronts Kyle alone and asks if his cousin set him up. Kyle insists he wouldn’t sabotage Theo at the expense of the company. Over with Jack, he encourages Summer Newman (Hunter King) to step back from the situation. He wants this to be a learning opportunity for Theo and Kyle.

Afterward, Summer takes Kyle over to the Grand Phoenix and chats with him about the incident. She pipes up about staying neutral and wants Kyle to rise above Theo’s games. Summer feels like as Theo’s boss, Kyle should try to bring out the best in him. Back with Jack, he warns that Theo won’t get special treatment just because he’s family. Theo promises not to screw up again and gets reassurance that Jack wants this to work out.

Across town, Billy Abbott (Jason Thompson) has breakfast waiting for Victoria Newman (Amelia Heinle). She mentions that it’ll have to be quick due to work. Billy struggles to keep up his phony happiness, but he tells himself to fake it ‘til he makes it. He also updates Victoria on his new consulting job in Chicago, which could take mean traveling from time to time. Victoria turns down Billy’s idea to celebrate upstairs and heads to the office.

Next, Victor Newman (Eric Braeden) pops in to see Victoria at Newman Enterprises. During their conversation, Victor confesses that he misses the company he poured his heart and soul into. However, Victor insists he’s not about to stage a comeback. Talk turns to “Billy Boy” the househusband, but Victoria brings Victor up to speed on her almost hubby’s new job.

At Devon Hamilton’s (Bryton James) penthouse, he warns Elena Dawson (Brytni Sarpy) that she should keep her distance from Amanda Sinclair (Mishael Morgan). Devon suggests they don’t know what Amanda is capable of. He feels like they have to stand together on getting Amanda out of Genoa City.

After Devon exits, Elena discovers the dossier full of Amanda info. At the Grand Phoenix, Devon confronts Amanda again and insists his lawyer has advised him to pursue legal action. Amanda doesn’t think the case would hold up since she was just doing her job. It was Devon who made the decision to give away his fortune. Amanda shuts down Devon’s suggestion that her reputation will take a hit. She’s still got plenty of clients and intends to stay in GC.

Young and the Restless (YR) Spoilers: Mariah Warns Lola, Summer Is On The Prowl! @celebratesoaps https://t.co/mcgXVRa3Jr

At Crimson Lights, Elena talks to Nate Hastings (Sean Dominic) on the patio. She wonders if maybe she’s been wrong about Amanda all along, but Nate doesn’t understand where this is coming from. Elena admits that Amanda and Hilary Hamilton (Mishael Morgan) are intertwined in her head. Nate doesn’t understand why Elena and Devon can’t seem to shake this obsession. He hints that Devon maybe looking for a reason not to let go.

Elena talks about how Amanda is a complicated woman. She alludes to Amanda having secrets that could make her dangerous. In the main dining area, Billy walks in and greets Amanda at a table. They start chatting as usual until Amanda grills Billy about his true intentions. She wants to know if Billy’s looking to have an affair. Billy notes that he isn’t and asks if Amanda’s trying to sleep with him. After Amanda dismisses that idea, it’s established that they’re just friends.

Billy ultimately heads home to Victoria and suggests a fun night in Chicago. When Victoria isn’t on board, Billy brushes it off as kidding around and looks bummed. Afterward, Billy texts Amanda that friends have a mutual bond of affection without sexual relations. Amanda sends a text back to thank Billy for the vocabulary lesson.

At Devon’s penthouse, he realizes the dossier’s been moved and dashes out the door again. The Young and the Restless spoilers say Devon may soon stir up more trouble than he bargained for. We’ll keep you posted as other Y&R news and rumors emerge. Stay tuned to see what else is ahead on the CBS soap.

The Young and the Restless Spoilers: Phyllis Wants Revenge, And Plans A Perfect Scheme