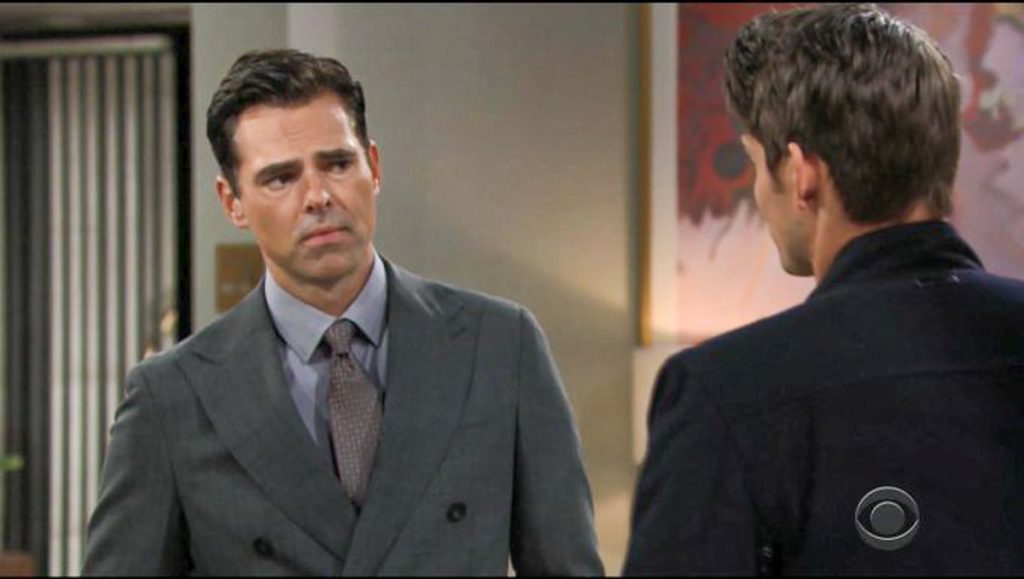 The Young and the Restless (Y&R) spoilers for Tuesday, October 29, tease that Billy Abbott (Jason Thompson) will think he’s got everything under control. At Crimson Lights, Billy and Victoria Newman (Amelia Heinle) discuss his encounter with Adam Newman (Mark Grossman), who knows Billy tried to kill him. Victoria’s skeptical of their truce and wonders if Billy’s sure he’s up for Halloween.

Billy offers reassurance before heading to his therapy session. He lets his therapist know he’s going well and won’t return to that dark place. The therapist hints that Billy’s battle isn’t over. She feels like even the smallest thing could set Billy off and bring back his inner demons.

At Adam’s penthouse, Victor Newman (Eric Braeden) comes over and wants to finish their previous conversation. Adam notes that Connor Newman (Judah Mackey) is the only reason he came back. He mentions how he wishes he could just bail on Genoa City with Connor; they both hate this town. Victor would never stand for that and reminds Adam that Connor needs a stable family. Adam doesn’t think the Newman clan’s stable and is adamant that he wants nothing to do with them.

Afterward, Victoria notices Victor’s upset and guesses Adam is responsible. Victor’s still disheartened over Adam being an outsider. He’d like to see Adam get another chance with the rest of the family, but Victoria thinks maybe distance is better. When talk turns to Victoria’s almost husband, Victor states that he won’t be so forgiving if Billy screws up again.

At Society, Theo Vanderway (Tyler Johnson) speaks with Phyllis Summers (Michelle Stafford) about Summer Newman (Hunter King). He thinks Summer’s a brilliant influencer who needs to be featured at the next Grand Phoenix bash. Phyllis suggests that Theo seems desperate and isn’t impressed by the pitch.

Back with Adam, he gets another visitor. This time it’s Phyllis, who’s anxious to get a revenge plot cooking. Phyllis feels like this is the perfect opportunity to crush Victor and take over Newman Enterprises. Adam’s done with all the vendettas and thinks Phyllis should let this go. He offers her $10 million to leave him alone, but Phyllis tears up the check and insists Adam won’t get rid of her that easily.

At the Abbott mansion, Jack Abbott’s (Peter Bergman) eager to track down Eric Vanderway (Jon Briddell), but Traci Abbott (Beth Maitland) has concerns. Their half-brother may not even know he’s adopted. Jack’s adamant and eventually calls Kyle to grill him about Theo’s father. At Traci’s urging, Jack admits Kyle and Theo may be related.

Kyle recalls that Theo’s father died when he was in high school. When he mentions Theo’s dad was from Chicago, Jack notes that’s what Eric Vanderway’s adoption records said. Meanwhile, Lola talks to Theo about being out of work. He puts on a brave face, but he seems to be struggling once he’s alone.

Kyle meets up with Lola later and fills her in on the possibility that Theo’s his cousin. She advises Kyle to subtly figure out the name of Theo’s father. Kyle accepts the guidance and invites Theo to eat with him, which leads to a chat about Theo’s parents. After Theo produces his father’s old pocket watch, he shows off the initials “E.V.” and confirms that his dad was Eric Vanderway.

The Young and the Restless spoilers say Kyle will look visibly shaken by the news. This storyline will continue to heat up, so we’ll give you updates as other details and rumors emerge. Stay tuned to see what’s ahead on the CBS soap.

Days of Our Lives Spoilers: Gabi One Step Ahead Of Lani – Ulterior Motive Revealed