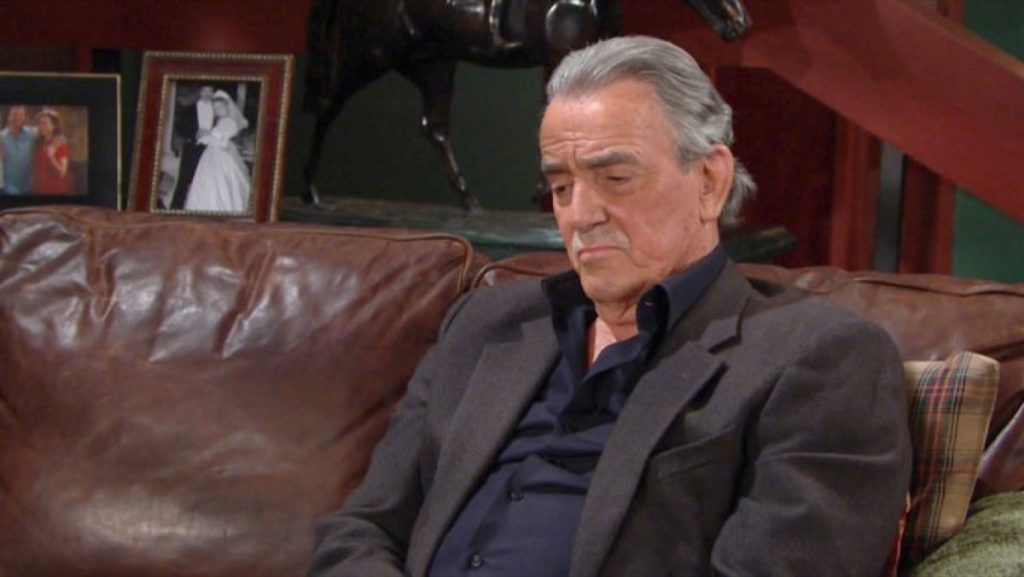 The Young and the Restless spoilers for Tuesday, July 30, tease that Billy Abbott (Jason Thompson) and Victoria Newman (Amelia Heinle) will be at home, kissing in the bedroom, when Victoria notes that she’s got a video conference coming up. They’ll discuss the fact that he hasn’t been sleeping, and she’ll wonder if he’s ok.

Then Christian Newman (Jamie and Alister Tobias) will appear and indicate that he called for Nick Newman (Joshua Morrow) but he didn’t come. Billy will decide to spend some time with him while Victoria heads to work.

Young and the Restless Spoiler – Chelsea Newman Becomes A Wealthy Woman, Thanks To Calvin Boudreau

Next on Y&R, at Nick’s house, Daryl Tulane (Gordon Thomson), who was Calvin Boudreau’s (John Burke) lawyer, will explain to Chelsea Lawson (Melissa Claire Egan) that Calvin left her $5 million. Turns out Chelsea and Calvin had a prenuptial agreement, and Chelsea wasn’t expecting this at all.

As it turns out, Calvin also left a trust fund for Connor Newman (Gunner and Ryder Gadbois), which will surprise Chelsea. She’ll have to sign for both gifts, and she’ll feel strange about it, but will eventually sign. Later, Chelsea will not know what to do next. She and Nick will talk about her future, and he’ll wonder if she’s going to stay or take off, but she’ll say she’s not going anywhere. They’ll happily embrace.

Next on Y&R, Abby Newman (Melissa Ordway) will tell Lola Rosales (Sasha Calle) that she’s sorry about Celeste Rosales (Eva LaRue) returning to Miami and that there is still time. But Lola will say that she has accepted that her mom won’t be there for her wedding.

Later, at Lola and Kyle Abbott’s (Michael Mealor) apartment, Kyle will leave Celeste a voicemail asking her to reconsider not coming to their wedding. Lola will arrive home, and in conversation Lola will mention being honest in their relationship, and Kyle will appear to be uncomfortable. They’ll discuss wedding plans, and Lola will try to get details out of Kyle about what he has planned, but he’ll stay mum on the details and promise her a wonderful wedding.

Next on Y&R, Nate Hastings (Sean Dominic) will meet with Victor Newman (Eric Braeden) and Nikki Newman (Melody Thomas Scott) at Newman Enterprises. Nate will share that the treatment protocol is working, and that he’d like Victor to consider introducing another element to the treatment. They’ll discuss side effects, which could be severe, and Victor will want to take the chance to beat his blood disease.

Later, Victoria will chat with Billy over the phone, and Billy will report that Christian is doing fine. Victoria will then talk with Nikki and Victor about his new treatment protocol, then she’ll talk privately with her mom. Talk will turn to Christian and Victoria will say that she couldn’t have down this without Billy’s help and support. Nikki will offer to give Billy and Victoria breaks with the children.

Meanwhile, Nate – having received permission from Victor – will head to Society and fill in Abby on the fact that Victor’s treatment protocol is working. Nate will invite her to his home to celebrate with some home cooking. They’ll happily kiss.

Young and the Restless Spoiler – Billy Abbott Spirals Out Of Control, Confesses His Problems To Victoria Newman

Finally, on Tuesday’s new episode of Y&R, Billy will take some of Victoria’s prescription meds and fall asleep. Then he’ll wake up at the Chancellor mansion and look at the wall, which now contains the words “STOP ADAM.”

Later, Victoria will arrive home and get upset with Billy because he left the children alone. Billy will tell Victoria that something is going on and that he’s scared he’s going to lose it and doesn’t know what to do. He’ll confess to her about his recent dreams about Delia Abbott (Sophie Pollono), and about how he took one of her meds and then wound up at the Chancellor mansion and what he saw on the wall. Victoria will say that they will get him help.

Be sure to tune in on Tuesday to catch up on everything happening on Y&R right now. Check Hollywood Hiccups often for updates, news, rumors, and spoilers!