The Young and the Restless Spoilers: Monday, July 29 – Michael Bests Adam – Rey & Adam Face Off – Chelsea Gets An Unexpected Visitor 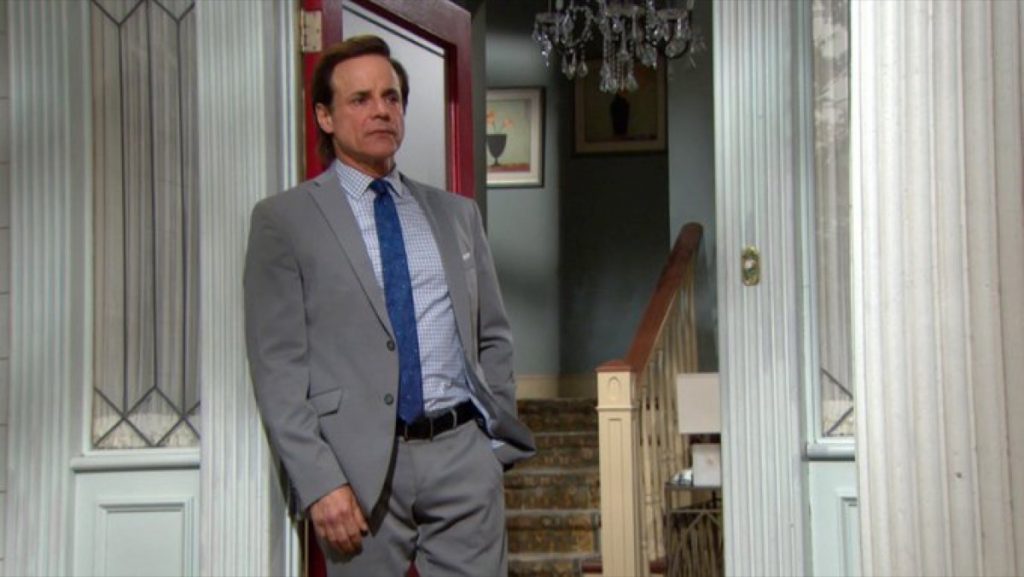 The Young and the Restless spoilers for Monday, July 29 tease that Michael Baldwin (Christian LeBlanc) and Adam Newman (Mark Grossman) will talk at Adam’s penthouse. Adam will want Michael to pick something up from the private investigator who took the incriminating photos of the judge in the custody case. But Michael will reveal that he got rid of the photos and the negatives, and that he had the private investigator leave the country.

Adam will welcome Michael to the dark side, and Michael will warn Adam that if he pursues Kevin Fisher (Greg Rikaart) or Chloe Mitchell (Elizabeth Hendrickson), then he’ll see the true extent of his dark side. Michael will reveal that he is going to run for district attorney and will hint that there’s something in it for Adam. Adam will in turn warn Michael not to cross him.

Next on Y&R, Nick Newman (Joshua Morrow) will be at the property where he was going to build a home for himself and Chelsea Lawson (Melissa Claire Egan), when Chelsea shows up. They’ll end up discussing Chelsea’s living situation, and Nick will inquire about whether she’s going to bring Connor Newman (Gunner and Ryder Gadbois) back there. She’ll say she’s undecided.

Meanwhile, Sharon Newman (Sharon Case) will show up at Rey Rosales’ (Jordi Vilasuso) room at the GCAC. They’ll say they miss each other before talk turns to Adam. She won’t think that helping Adam with Christian Newman (Jamie and Alister Tobias) was wrong, and Rey will say Adam is more than a friend to her…and that Sharon loves him. Sharon will counter that she feels pity for Adam and not love. Rey won’t buy it.

Ultimately, Rey will admit that he’s scared for Sharon and that he can’t save her from this. He’ll think that she’s using him to hide her real feelings for Adam, and he’ll say that their relationship is done.

Later, Sharon and Billy will reconnect, and they’ll discuss Christian, and Billy will opine that Adam trashes lives. They’ll also discuss Billy’s recent nightmares, and Billy will admit that he’s living in a constant nightmare. Every night he searches for Delia Abbott (Sophie Pollono) and tries to save her from Adam.

Y&R Spoiler – Kyle Abbott Settles Back Into The Apartment

Next on Y&R, Kyle Abbott (Michael Mealor) and Lola Rosales (Sasha Calle) will discuss her mother’s recent departure, as Kyle will have brought some of his belongings back to the apartment. They’ll eventually end up talking about New York, and Lola will express an understanding about how Kyle went out of control after Summer Newman (Hunter King) broke up with him. They’ll ultimately end up in the bedroom together.

Young And The Restless Spoilers: Major Trouble Ahead For Shey – Rey And Sharon Break Up Over Adam https://t.co/HHxJdgejEt pic.twitter.com/ysN4Eb3Xn0

Next on Y&R, at Society, Adam and Rey will run into each other and they’ll start arguing over Adam’s request for Sharon to be a guardian for Christian. Rey will say that he believes Adam used the custody situation to suck Sharon further into his world. Adam will figure out that this caused relationship problems for Rey and Sharon, and he’ll offer a fake apology.

The men will continue arguing, and Rey will say that Adam sees Sharon as prey, but Adam will muse that Sharon will come to him. Rey will belt back a drink and tell that this could happen sooner than he thinks.

Young and The Restless Spoiler – Chelsea Lawson Gets An Unexpected Visitor

Back at Crimson Lights, Phyllis will bump into Michael, and they’ll discuss the custody case and Michael’s decision to bail on Nick. They’ll discuss Adam a bit and Michael will pretend like he stays as far away from Adam as he can. Phyllis won’t buy it.

Finally, on Monday’s new episode of Y&R, Daryl Tulane (Gordon Thomson) will arrive at Nick’s house. He’ll announce that he’s got good news for Chelsea and that he’s about to make her a rich woman.