The Young and the Restless Spoilers: Tuesday, August 13: Lola Gets Letter From Her Dad – Christian Runs Away – Chelsea Learns Of Anita’s Scam 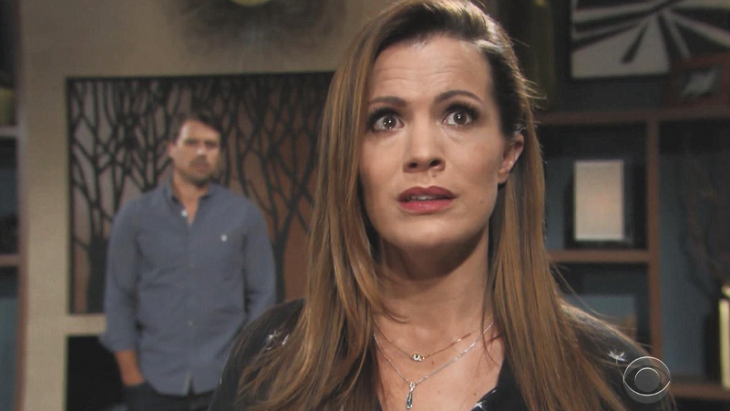 The Young and the Restless spoilers for Tuesday, August 13, tease that Lola Rosales (Sasha Calle) and Rey Rosales (Jordi Vilasuso) will catch up at Lola and Kyle Abbott’s (Michael Mealor) apartment. They’ll discuss the upcoming wedding and honeymoon, which will lead into a talk about their mom Celeste Rosales (Eva LaRue) and how she’s not coming to the wedding.

Rey will wonder if he might be able to change Celeste’s mind, but Lola will say that Jack Abbott (Peter Bergman) is going to try to get her to come. Rey will be concerned that Celeste might try to bring their father as her date. Lola will then see that she’s received a letter from their dad. The letter will wish Lola well on her wedding, reveal that he and Celeste did not get back together, and say that he accepts that Lola doesn’t want him to walk her down the aisle.

Lola will cry, and Rey will read the letter and his response will be to say that their dad has a lot of nerve to send Lola something like this. Lola will be worried about shutting her father out, and Rey will conclude that it’s her wedding and the decision is hers.

Young And The Restless Spoilers – Anita Lawson Is Thrown Out

Next on Y&R, Chelsea Lawson (Melissa Claire Egan) will talk with her mother Anita Lawson (Catherine Bach) at Nick Newman’s (Joshua Morrow) house. Chelsea will want an explanation as to why Anita turned down the $1 million she offered before, and she’ll note that Anita never even asked how much money she inherited. Anita will say that Daryl Tulane (Gordon Thomson) told her, and that Calvin Boudreau (John Burke) left her money, too.

Chelsea won’t buy it, and she’ll soon get the picture that Anita sole assets. Anita will say that Calvin had some iffy off-the-book business dealings, and it will turn out that Anita and Daryl kept the proceeds and that those proceeds totaled $5 million. Chelsea will hit the roof and make her mother leave.

Later, Daryl will arrive with two suitcases and a bag of money as a peace offering from Anita, and he’ll reveal Calvin’s real will, which left Chelsea the contents of a storage unit, a townhouse, and cars. Daryl will warn Chelsea to launder the money just to be safe. Chelsea will then give Daryl one of the suitcases for him and Anita.

Next on Y&R, Victoria Newman (Amelia Heinle) will text Adam Newman (Mark Grossman) about rescheduling a visit with Christian Newman (Alex Wilson), angering Adam. Adam will then go to Victoria’s house, and Victoria will lie that Christian is sick and sleeping. After Adam leaves, Billy Abbott (Jason Thompson) will warn Victoria that they won’t keep getting away with keeping Adam from Christian.

Later, in Chancellor Park, Victoria and Billy will play with their kids and Christian, when Adam approaches Christian. As it turns out, Nick will arrive right at that moment, and Nick and Adam will start arguing. Nick will threaten Adam, and it will be a big scene, but it will be interrupted when Victoria realizes she can’t find Christian.

After a search, Adam will find Christian hiding in the bushes and will get him out and the two will play soccer together. Nick will then appear and take Christian away.

Young And The Restless Spoilers – Phyllis Summers Is Persuasive

Next on Y&R, Phyllis Summers (Michelle Stafford) will arrive at Devon Hamilton’s (Bryton James) penthouse to discuss The Grand Phoenix. She’ll press Devon for why he’s now negotiating for the hotel when he passed on her investment offer earlier. Devon will reveal that he is passing on the whole thing, but Phyllis will persist and suggest that he purchase the hotel and then sell it to her. After some back and forth, Devon will make it abundantly clear that the answer is no.

Later, at Society, Phyllis will approach Abby Newman (Melissa Ordway) and apologize for their argument. Abby will say that she’s reconsidering working with Phyllis, and Phyllis will do her best to persuade Abby to keep working together. Finally, Abby will put two and two together and realize that Adam let Phyllis go.

Finally, on Tuesday’s episode of Y&R, Phyllis will explain to Abby how Adam put the hotel up for sale and how their business venture will be lost unless Abby buys the hotel. After some serious persuasion, Abby will agree to purchase the Grand Phoenix, but she’ll have one condition. She’ll want Phyllis to come up with some money so she can purchase a state in the hotel, so that their interests are aligned. Abby will give Phyllis one week to come up with the cash.