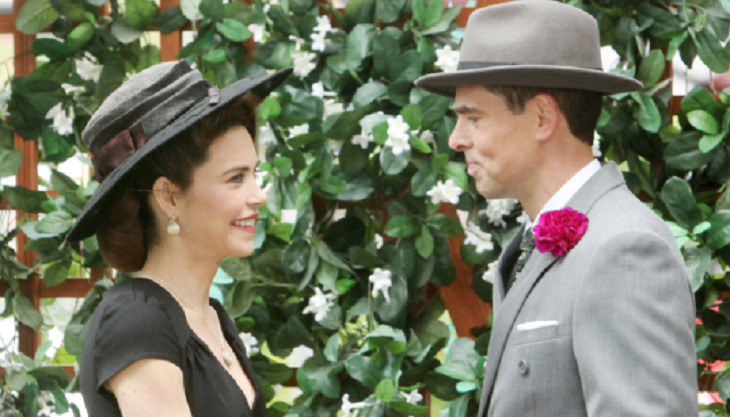 Traci Abbott (Beth Maitland) plays a character, who only has a first name (Velma) in her book on The Young and the Restless. But Y&R is expanding this retro story-within-a-story, entitled Stolen Lockets, Broken Hearts, by incorporating two more regular players.

To-date, only Lily Winters (Christel Khalil) has been seen in Traci’s tale. Iris and Flynn, as played by Cane Ashby (Daniel Goddard), appeared to be moving toward involvement. Now, with Dina Mergeron’s (Marla Adams) input, it’s possible that Traci will write Flynn away from Iris and move him toward herself. That would dovetail with Traci’s cautiously optimistic hopes that she and Cane might have a chance for personal involvement in the near future.

This very refreshing mini-arc follows Y&R’s prior regime’s efforts to present the Abbott family in a retro setting. Those scenes were steeped in Genoa City reality, as Dina’s early history, along with that of her then-fracturing family, was presented.

Longtime Young and the Restless viewers are happy to see Maitland’s inclusion in a regular storyline. This cast stalwart first joined Y&R in 1984, when the Abbott family became one of the show’s lead families. The actor earned a Daytime Emmy award in the Outstanding Actress in a Supporting Role category in 1985.

Khalil’s voluntary drop to recurring status, which took place last year, remains in effect. So, the need to expand Traci’s character list makes the write-in’s of Billy Abbott (Jason Thomson), as Derrick Gould (the only personality in Stolen Lockets, Broken Hearts who has a last name so far), and Victoria Newman (Amelia Heinle), as Cora, useful.

Following current events in GC, Derrick, who is married to Iris in Traci’s book, is involved with Cora, as Flynn confirms.

Storylines, like the two-level one that’s being presented now, remind devoted fans and newer viewers that soap operas can be fun. Sure, deeply dramatic topics, wild tales, and topical issues are part of daytime. But escapism, like Traci’s creative mind, is projecting, deserves its due. And that’s what this Young and the Restless is delivering.