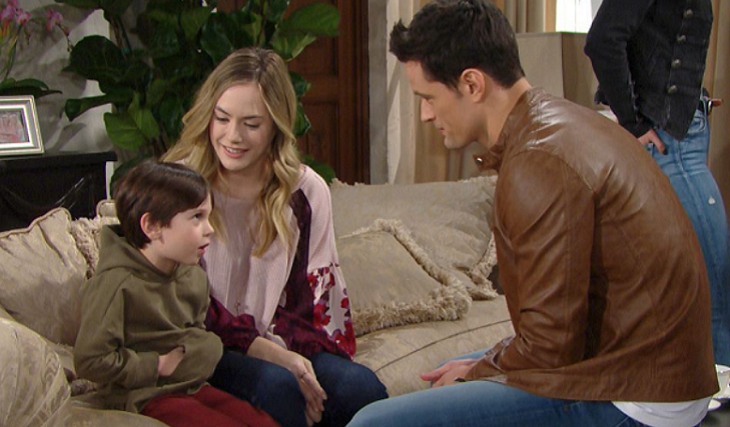 Hope Spencer (Annika Noelle) hasn’t yet reverted to her Logan last name on The Bold and the Beautiful. While annulment papers were signed by ‘Lope’, a courthouse hearing that Carter Walton (Lawrence Saint-Victor) must take place before she’s fully free. But that hasn’t prevented Hope from telling Thomas Forrester (Matthew Atkinson) that ‘Tope’ is now possible.

There’s no doubt that Hope still loves Liam Spencer (Scott Clifton). She believes that he’ll always represent her ideal man. Thomas doesn’t care that he’s her second choice, for him it’s an understood part of the plan.

Just as Thomas was about to tell a second character the truth about Phoebe Forrester (Madeline Valdez and River Davidson) actually being Beth Spencer, dialogue intervened. With that, B&B fans must be wondering how and when the baby swap secret will ever be revealed?

B&B actually began one episode where it left off, with Thomas pausing before seeming about to spill the truth to his sister, Steffy Forrester (Jacqueline MacInnes Wood). Then, it shifted his efforts to Brooke Logan Forrester’s (Katherine Kelly Lang) log cabin, where ‘Lope’ recently lived.

Bold And Beautiful Spoilers– Will Hope Give Thomas A Chance?

The latest heart-tugging scene involving the well-cast child actor Henry Joseph Samiri (Douglas Forrester) and Noelle played out. But Thomas’ view of his motherless son and the revived love of his life, Hope, didn’t sway his opinion, at least not then.

A surprising admission by Hope followed, where she told Thomas that she’ll not only continue bonding with Douglas, which was expected but will also now give Thomas a chance. That new news was exactly what Thomas wanted to hear and served to stop him from telling Hope that her baby wasn’t stillborn.

Days Of Our Lives Spoilers: Haley And JJ Share An Emotional Goodbye