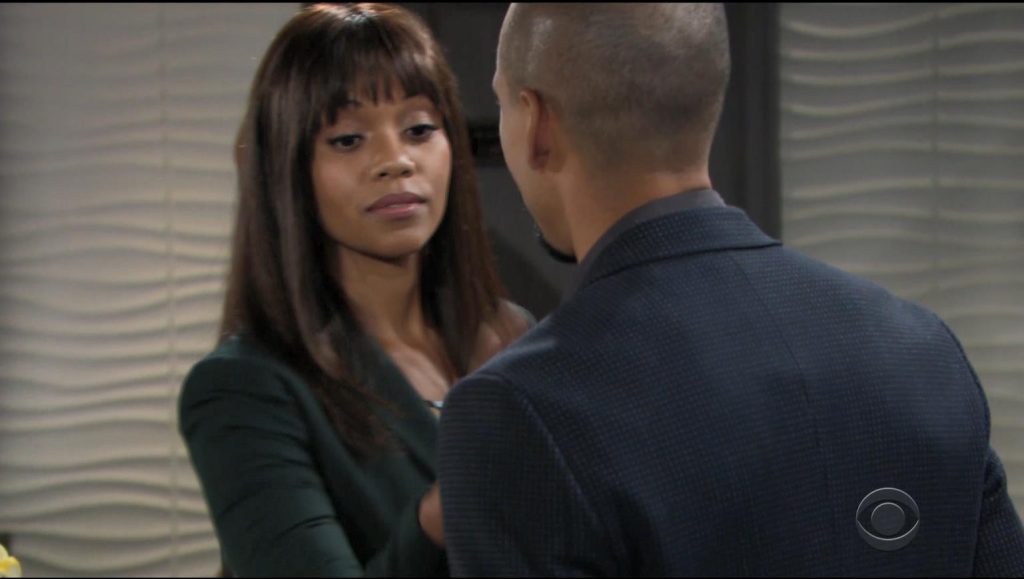 Mariah will shoot out to the car to retrieve Elena’s gift and promptly run into Amanda Sinclair (Mishael Morgan), whose appearance will stun her.

Devon will explain about Amanda, while Amanda acts cold toward everyone. Elena will approach and think that Amanda should leave, but Amanda will insist on saying her peace. She’ll tell Devon that she got a text from Chance Chancellor (John Driscoll) and that he can’t come to town, but that he’s sending paperwork overnight so that Katherine Chancellor’s (Jeanne Cooper) true wishes can be honored. After she leaves, Elena will cut the party short, and Mariah will be very upset by the whole scene.

Next on Y&R, back at Devon’s penthouse, he’ll lament that Amanda put a damper on Elena’s birthday. He’ll present her with a cupcake, and she’ll make a wish that the issue with Katherine’s will gets resolved and that Amanda goes back where she came from.

Next on Y&R, at Society, Sharon Newman (Sharon Case) will talk with Jack Abbott (Peter Bergman). The two will catch up on the Victor Newman (Eric Braeden) death story, and about Jack’s recent epiphany about Dina Mergeron (Marla Adams). Talk will turn to Adam Newman (Mark Grossman), and she’ll remark that yesterday marked the end of that chapter. Jack will inquire about Rey Rosales (Jordi Vilasuso), and Sharon will say that she can only tackle one ex at a time.

Meanwhile, in the kitchen, Theo Vanderway (Tyler Johnson) will approach Lola Abbott (Sasha Calle) about getting Kyle Abbott’s (Michael Mealor) friendship back. Lola will end up cutting her finger as she’s chopping when Theo mentions Zoe Hardisty (Anna Grace Barlow) and Theo will faint. They’ll sort of bond over his passing out, and later, Lola will decide to give him the benefit of the doubt about being sincere in wanting to make up with Kyle. She’ll be on board if he respects her marriage.

Next on Y&R, at Jabot, Kyle will comfort Summer Newman (Hunter King), who will still be in shock over Victor’s death. He’ll think she should go home, but she’ll insist on staying at work. They’ll work on a presentation that Kyle needs to give, and Kyle will be grateful for all her help – she’s his secret weapon. Jack will then arrive and the three will share some nice moments together. Jack will pledge his support to Summer given what she’s going through right now.

Dina has a moment with Jack and it leads to a great idea. What will Jack ask Traci to do with him on #YoungandRestless?#YRhttps://t.co/wZeY0DxhnZ

Next on Y&R, Sharon will talk with Rey at Crimson Lights. They’ll discuss her interaction with Adam, and she’ll confess that she now knows that she can’t help Adam, and she’ll wish that she had listened to Rey’s warnings sooner. Rey will think that she’s keeping something from him still, and he’ll think it’s good that she cut herself free from Adam. Rey will wonder what’s next for her, and Sharon will note that she wants a fresh start.