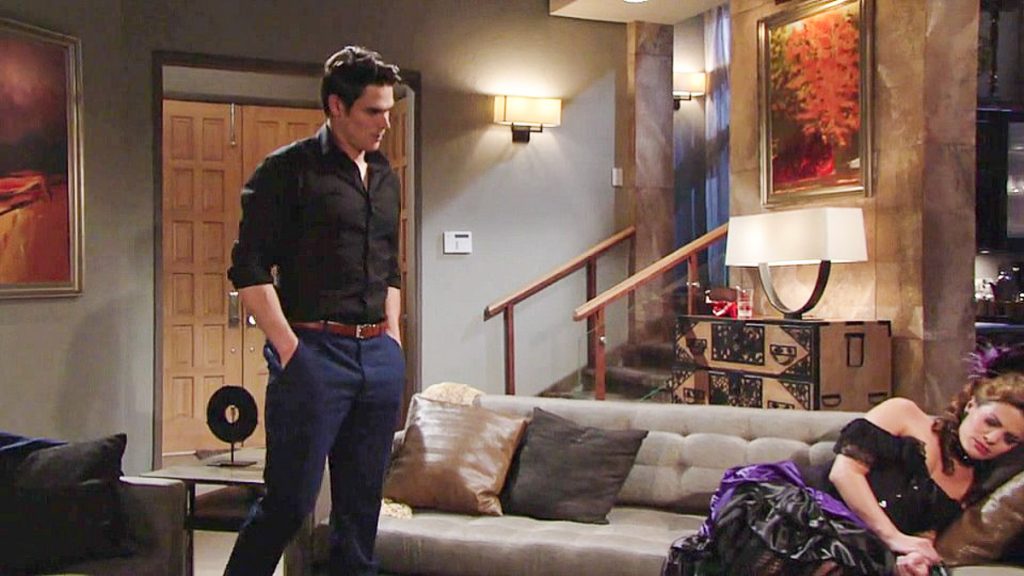 The Young and the Restless (Y&R) spoilers for Thursday, October 31, tease that Halloween will bring some drama-filled nightmares. At the Grand Phoenix, Rey Rosales (Jordi Vilasuso) has some jewelry for Sharon Newman (Sharon Case). He doesn’t want their evening to end, so they head up to a suite and make love. Afterward, Rey has a black-and-white dream about plotting to steal jewels from the Newman ranch.

Sharon ends up duping Rey in this dream. After she doesn’t make it to the meeting spot they settled on, Adam Newman (Mark Grossman) appears and explains that he’s with Sharon now. He suggests they had to have a fall guy and lets Rey know it’s a tough break. Sirens ring in the distance before Rey ultimately wakes up and wanders over to the window.

Over with Phyllis Summers (Michelle Stafford), she has a dream that reminiscent of The Devil Wears Prada – at least in the beginning. Sharon is Phyllis’ frantic assistant, who struggles to get everything just right for her boss. Phyllis’ portrait is on the wall since she’s taken over Newman Enterprises. She ends up firing Kyle Abbott (Michael Mealor) and shutting down Jack Abbott’s (Peter Bergman) pitch.

A press conference kicks off later followed by Phyllis ranting at the Newmans. She’s surprised when she realizes none of them can hear her. Invisible Phyllis listens as they talk about her being poor and living on the streets. She hears all about her downfall before Nick jokes about lending her a helping hand. After the Newmans erupt into laughter, Phyllis wakes up and leaves her suite to make sure she’s visible.

Over with Abby Newman (Melissa Ordway), she notes how crazy Halloween can be and opts to just stay in a suite. Once Abby drifts off to dreamland, she finds herself stuck in a sitcom at Society. Kyle, Lola Abbott (Sasha Calle), Theo Vanderway (Tyler Johnson) and Mariah Copeland (Camryn Grimes) all insult Abby, who does her best to protest. A laugh track plays as their jokes continue, but Abby screams and awakens. She’s relieved to know that nightmare wasn’t real!

At Nick Newman’s (Joshua Morrow) place, he dozes off during a horror flick and has a nightmare of his own. Nick learns his loved ones are mourning Victor and assumes they mean Victor Newman (Eric Braeden). He drops the knife that’s in his hand and insists he’s not responsible. Phyllis is on hand to grieve, which Nick doesn’t understand since she hates Victor.

Nikki Newman (Melody Thomas Scott) eventually clarifies that “Victor, Jr.” has died. Nick finds Adam in the casket and reels as Chelsea Newman (Melissa Claire Egan) makes a declaration. She notes that Connor Newman (Judah Mackey) will go by the name Victor now. Everybody’s praising Adam, so Nick’s obviously not happy about that. He’s also upset when Rey arrives to arrest him for Adam’s murder!

Sharon contends that she saw what happened and points the finger at Nick. Of course, Nick defends himself. He ultimately argues that Adam’s gone and must’ve faked his death like before. Nick calls out for Chelsea, who shows up to snap him back to reality. Chelsea’s sorry for the falling asleep at Adam’s penthouse, but Nick’s just glad she’s home now.

Kyle’s nightmare involves Theo turning an Abbott gathering into a wild party. The place is trashed and Theo’s keen on there being plenty of tequila. Abby is pleased about the bash and winds up taking a dig about Lola. When Lola hears Summer Newman’s (Hunter King) name, she yells at Kyle to get over her. Mariah chimes in to suggest if Kyle can’t see how special Lola is, he doesn’t deserve her.

Jack walks in angry and tries to get rid of Theo, but that’s when Theo drops a bomb. He’s had Jack declared incompetent and is appointed himself guardian. Theo wants Jack to live with Dina Mergeron (Marla Adams) now, so Kyle’s dream just keeps getting worse. After Theo talks about this being an eternal party, Kyle awakens startled. Lola does her best to console Kyle, who’s clearly rattled.

The Young and the Restless spoilers say this will be one crazy episode, so don’t miss the Halloween spookiness. We’ll give you updates as other Y&R news and rumors emerge. Stay tuned to see what else is ahead in Genoa City.

The Bold and the Beautiful Spoilers: Shauna Confides In Quinn About Her Kiss With Ridge – Jealous Quinn Freaks Out