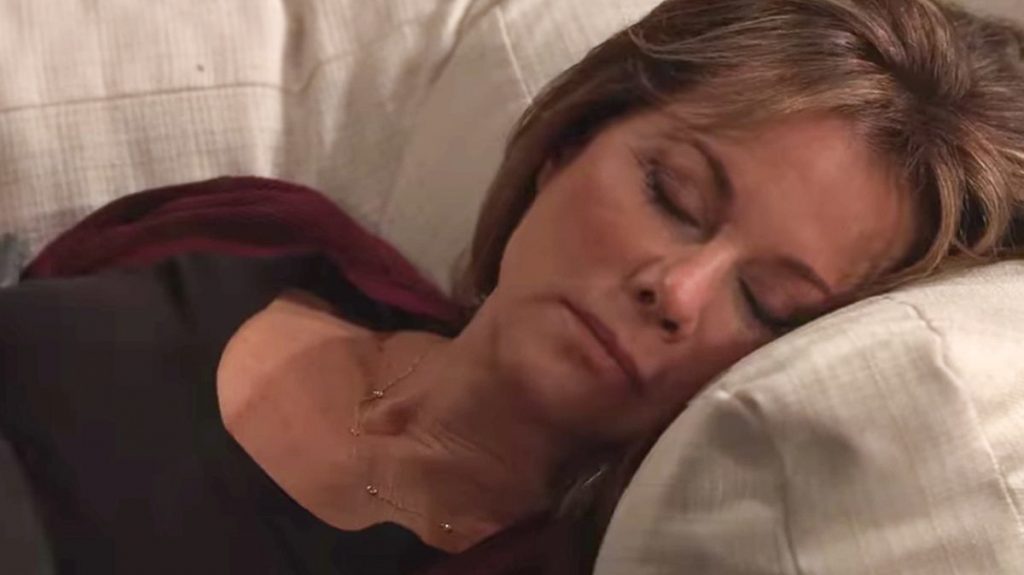 Welcome to your Wednesday, October 30th General Hospital (GH) recap! We begin our day at the Metro Court hotel where a large Halloween party is taking place. Ava Jerome (Maura west) dressed as Cruella De Ville, fiddle with the gun in her purse when Laura Spencer (Genie Francis) startles her.

Also arriving at the party, is Sasha Gilmore (Sofia Mattson) dressed as a superhero and Michael Corinthos (Chad Duell) dressed as a Game of Thrones character. She worries about being the town pariah and Michael tells her to have fun. Suddenly the elevator opens and its Cleopatra and Antony aka Nina Reeves (Cynthia Watros) and Valentin Cassadine (James Patrick Stuart).

TJ Ashford (Tajh Bellow) is dressed as Captain America as he approaches his mom Jordan Ashford (Brianne Nicole Henry) and says he has something important to ask her.

At Elizabeth Webber’s (Rebecca Herbst) house she is cleaning up and looks longingly at a family photo. Cameron Webber (William Lipton) comes downstairs and says she does not need to hide her feelings, as they embrace. There is a knock on the door and its Trina Robinson (Sydney Mikayla) inquiring if Cam is ready for the Halloween dance. Elizabeth tells him to go have fun, she has to work tonight anyway.

At General Hospital (GH) , Hamilton Finn (Michael Easton) is at his daughter’s bedside telling her about Roxy (the lizard) as Hayden Barnes (Rebecca Budig) quietly listens. Hayden comes in and Finn has given her a few pieces of chocolate for Halloween.

Finn tells Hayden that Violet is going to be okay and will recover soon. Hayden wonders if Finn is now going to be a dad to Violet, suddenly Elizabeth approaches saying shes been trying to reach her.

At the Corinthos Mansion, Carly Corinthos (Laura Wright) tells Jason Morgan (Steve Burton) that Donna is sleeping and they have about an hour before she wakes for food. Jason asks how she is doing and she says fine, as he explains the Sam situation. Jason says he will get through this, but he is worried about Alexis.

Josslyn Jax (Eden McCoy) runs downstairs and says she thinks she lost the watch Oscar gave her. Carly says she should check with the housekeeper and Joss says she already did.

Outside Alexis Davis’s (Nancy Lee Grahn) house, her daughter Molly Lansing (Haley Pullos) bangs on the door and wonders why there is no answer. We see Alexis passed out on the couch as Molly eventually gets into the house.

Molly tries in vain to wake her and Alexis eventually gets up, but has an awful headache. Molly insists on taking her to General Hospital (GH).

General Hospital Spoilers – Ava Jerome has a stalker on Halloween

At the Metro Court, Laura Spencer (Genie Francis) asks Ava how she is doing, especially after last years craziness. Ava says she would rather not think about Ryan and would really like to have a drink.

Jasper Jax (Ingo Rademacher) shows up and says hello to Laura who tells him that the codicil maybe apart of Helena’s portrait.

After spotting Sasha, Valentin Cassadine (James Patrick Stuart) says they should just leave the party, but Nina insists that they stay. Nina tells Sasha that if Cassandra Pierce goes free, she is holding her responsible.

General Hospital Spoilers – TJ has a surprise for Curtis and Jordan

TJ asks them if they still have their engagement ring from before, Curtis realizes hes going to ask Molly to marry him. Curtis says hes happy for him, but Jordan says she not sold on the idea.

At the Corinthos mansion, Cameron runs into Jason and apologizes for yelling at him, he’s upset for his mom. After they talk, Cam spies some alcohol and steals it in a soda bottle.

Elizabeth is stunned that Hayden has a daughter, but is so happy that she told her the truth. Alexis goes to the hospital and Finn checks her out, he notices a rash on her arm.

Ava drops her purse and Michael sees the gun, she explains she needs it after the past year. Valentin tells Nina that he realizes the Helena portrait maybe more valuable than they realize…..flash to preview