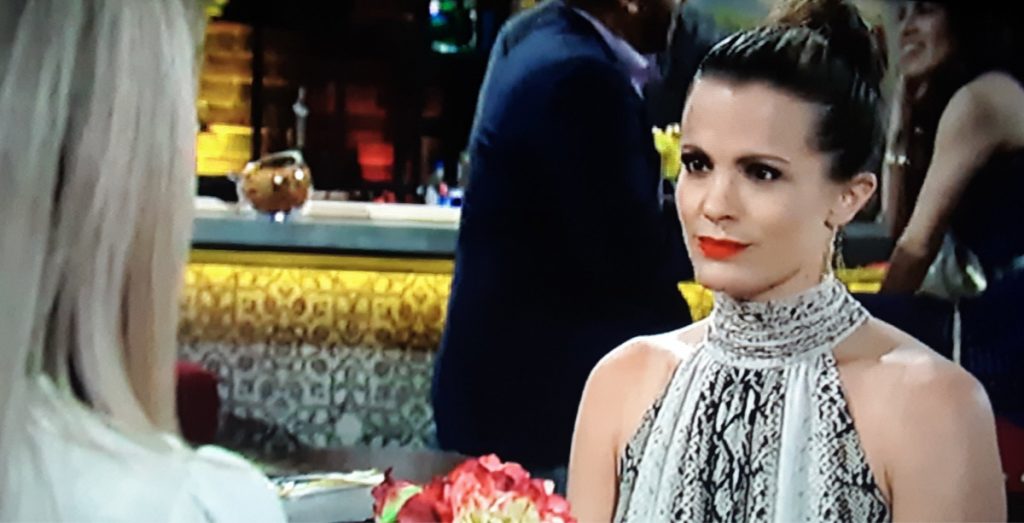 The Young and the Restless spoilers for Thursday, August 22, tease that Nick Newman (Joshua Morrow) will thank Victor Newman (Eric Braeden) for arranging the restraining order against Adam Newman (Mark Grossman) before inviting him to his visitation with Christian Newman (Alex Wilson).

Meanwhile, at Crimson Lights, Phyllis Summers (Michelle Stafford) will wait for her meeting with Chelsea Lawson (Melissa Claire Egan). Once Chelsea arrives and gets her coffee, Phyllis will approach her about an investment opportunity. A skeptical Chelsea will listen as Phyllis tells her all about The Grand Phoenix and how Abby Newman (Melissa Ordway) owns it. Chelsea will think about it, and then she’ll leave Nick a voicemail asking him to call her.

Next on Y&R, Sharon Newman (Sharon Case) will tell Adam that she can’t marry him. He’ll go into full “not taking no for an answer” mode and will be convinced that she really wants him and that she wants him to change her mind. He’ll pitch himself to her again, but still she’ll say no. She’ll tell him that their relationship is toxic and chaotic, and that she won’t be pressured into doing this. Finally, Adam will tell her to get out and he’ll end up throwing a glass against the wall.

At their honeymoon destination, Lola Abbott (Sasha Calle) and Kyle Abbott (Michael Mealor) will complain about not being able to snorkel due to the rain. They’ll realize that they have the rest of their lives to have adventures. They’ll each recount how they envision their happy futures together and Kyle will indicate that the details of how it all works out aren’t important, just that he gets to spend forever with her.

Next on Y&R, at Society, Chelsea will talk with Abby. Chelsea will say that she wants to cut Phyllis out of The Grand Phoenix deal and take her place. Abby will balk, but Chelsea will persist. Later, Phyllis will find Abby, who will promptly tell Phyllis that she’s rescinding her offer for the hotel and that she’s filled the hotel manager position. Chelsea will appear, and Phyllis will fume as Abby lets Phyllis know that Victor overheard her bragging about cutting her out of the deal.

Next on Y&R, Adam will get a call from Chelsea. Chelsea will want to meet and talk about Connor Newman (Judah Mackey).

At Newman Enterprises, Phyllis will rage at Victor, accusing him of sabotaging her life. Victor will say that he just told Abby what she said to Adam, and that she’s the one to blame for all of this. They’ll rehash Phyllis’ decision to get immunity for the JT Hellstrom (Thad Luckinbill) ordeal and whether she betrayed Victoria Newman (Amelia Heinle) and Nikki Newman (Melody Thomas Scott).

Finally, on Thursday’s new episode of Y&R, Phyllis will threaten Victor and tell him he’ll lose everything, and that he shouldn’t underestimate the power of a woman with nothing to lose. He’ll tell her to bring it on.