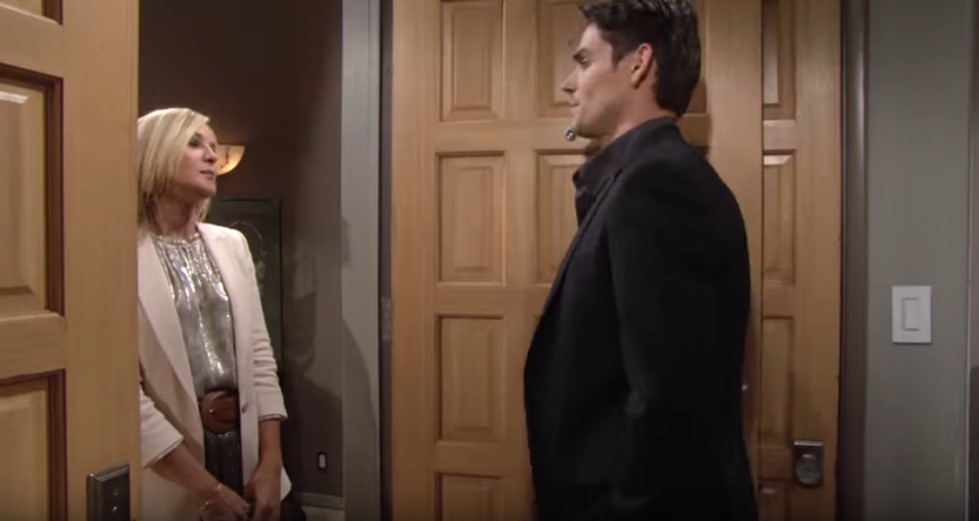 The Young and the Restless spoilers for Monday, September 30, tease that Nick Newman (Joshua Morrow) will learn from Chelsea Lawson (Melissa Claire Egan) that Connor Newman (Judah Mackey) is upset, and that Adam Newman (Mark Grossman) is leaving Genoa City. Nick will think that Adam’s running so as to not face what he’s done, and Chelsea will be upset that Connor’s life is turned upside down. They’ll argue about Adam and whether he could turn his life around, and in the course of their back-and-forth, Nick will disclose that Victor Newman (Eric Braeden) is actually alive.

Chelsea will hit the roof as Nick explains the ruse of faking Victor’s death to get Adam to confess to messing with Victor’s meds. Chelsea will be upset that Nick didn’t trust her and about the fact that Connor has suffered because of Nick’s need to get revenge on Adam. She’ll point out that the plot has cost Connor his father.

Next on Y&R, at the Newman Ranch, Victor will wonder how Adam found out he was really alive. Adam will brush off the question and say that he came to tell Victor that he’s leaving Genoa City. Victor will reveal that he knows that Adam doubled his meds, and Adam will find out that his siblings were in on the ruse about Victor’s death as well. The two men will argue for quite a while, with Adam accusing Victor of trying to run him down with a car and later admitting that he tampered with Victor’s meds.

Victor will try to get Adam to stay in Genoa City for Connor, but Adam will feel that he doesn’t deserve his son, and he’ll want to let this whole life go. Ultimately, both men will tear up and Adam will tell Victor that all he ever wanted from him was his respect. Finally, Adam will say that he’s sorry and leave, just before Nikki Newman (Melody Thomas Scott) appears to tell Victor that Michael Baldwin (Christian LeBlanc) is on his way.

Next on Y&R, at Crimson Lights, Jill Abbott (Jess Walton) will try to reach Tucker McCall (Stephen Nichols), then she’ll talk with Cane Ashby (Daniel Goddard), who will learn about the issue with Katherine Chancellor’s (Jeanne Cooper) will. Turns out, there will be a meeting about the will later at Devon Hamilton’s (Bryton James) penthouse. They’ll discuss Cane’s new work and their respective lives, then talk will turn to Amanda Sinclair (Mishael Morgan), whom Jill can’t believe is working for Chance Chancellor (John Driscoll). Cane will offer to go with Jill to Devon’s later.

At Devon’s penthouse, Elena Dawson (Brytni Sarpy) will talk with Devon, who will explain that he hired Brittany Hodges (Lauren Woodland) to represent him, so she would be the one to interact with Amanda. Elena will opine that Amanda is a grifter and that the whole situation is a big scam. Elena won’t be at the meeting about the will later.

Next on Y&R, at Society, Amanda will notice Nate Hastings (Sean Dominic) and wonder what he wants. Nate will ask why she’s messing with the people he cares about. She’ll argue back that she was hired because of her credentials, not because of her appearance. She’ll refer to him as the doctor who let Victor die, but Nate won’t let her get away with deflecting. Later, Amanda will tell an unknown person over the phone that she received the will documents and that she doesn’t like surprises.

At Crimson Lights, Nate will meet up with Elena and fill her in about his chat with Amanda. They’ll discuss, and Nate will hope that the meeting later will end all of this.

Finally, on Monday’s new episode of Y&R, at Devon’s penthouse, Brittany will be present with Devon when Amanda arrives and trades jabs with Brittany. Cane and Jill will arrive and be momentarily stunned by Amanda’s appearance, then Jill will tell Amanda that she knew Katherine better than anyone and can tell her exactly what Katherine would think of all of this and of her. Amanda will eventually read the “real will” that Chance sent to her, and the bulk of Katherine’s fortune will be left to Cane.