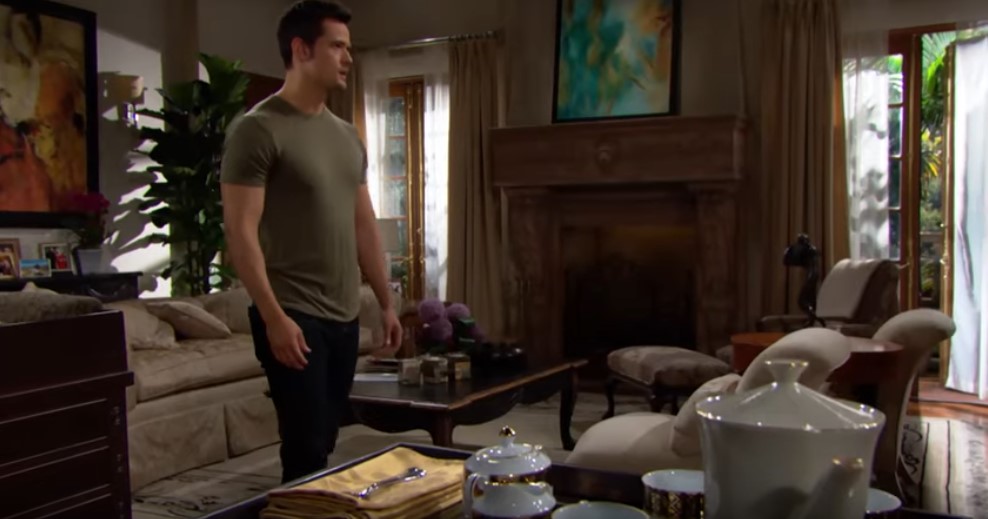 The Bold and the Beautiful spoilers for Monday, September 30, tease that Thomas Forrester (Matthew Atkinson) will be feeling ready for battle. As B&B viewers know, he just had a fierce argument with Brooke Forrester (Katherine Kelly Lang) following his clandestine visit with Douglas Forrester (Henry Joseph Samiri).

He waited for Brooke to return from visiting Katie Logan (Heather Tom) at the hospital, then pounced when she returned. Things got pretty intense between the two, and Thomas refused to leave when Brooke ordered him to exit the mansion. He declared that his place was there, in his father’s home, and he basically let Brooke have it.

Neither Thomas nor Brooke were willing to back down from their positions, and that will lead Thomas to make some big decisions on Monday’s episode of B&B. He’ll find himself wanting to eliminate the Logans from his life completely, and from his father’s life. As B&B viewers know, Brooke and Ridge Forrester (Thorsten Kaye) have had a really difficult time lately, and it seems that Thomas will decide to make it his mission to rid the Forrester family of the Logans for good.

Well, it appears that Thomas may get some help in that regard from his friend Vinny Walker (Joe LoCicero). As B&B viewers will remember, Vinny just visited with Danny the bartender (Keith Carlos) at Bikini Bar, and he learned something very interesting and shocking. Danny disclosed to Vinny that Ridge spent the night with Shauna Fulton (Denise Richards) recently. Danny told Vinny that Ridge and Shauna slept in the same bed all night, which got Vinny very interested.

It seems that Vinny’s next move will be to tell Thomas all about the incident, and according to B&B spoilers, Thomas will eventually use that information as a means of coming between Brooke and Ridge. Of course, Thomas will know that Brooke would be horrified to learn that Ridge spent the night with another woman – and with Shauna, to boot! It looks like Thomas will end up using this information as a way to put his plan into motion to break up Ridge and Brooke.

Next, on Monday’s new episode of B&B, Ridge will get some more support from Shauna. As B&B viewers will remember, Shauna appeared at Forrester Creations to see Ridge, and the two ended up having a lengthy conversation. Ridge finds Shauna easy to talk to, and they seemed to bond over their mutual desire to look out for their children. Thomas wants to protect Thomas, and Shauna wants to protect Flo Fulton (Katrina Bowden).

Well, after listening patiently to Ridge’s troubles, it seems that Shauna will vow to always be there for Ridge, even if Brooke can’t be. That might send up a few red flags for Ridge, but he’ll also probably know that Shauna has a point. After all, Brooke hasn’t been understanding or there for Ridge at all when it comes to his need to protect Thomas. Rather, Brooke constantly rails against Thomas and vilifies him – and of course he deserves a lot of that, but still he’s Ridge’s son.

Thomas learns Shauna and Ridge spent the night together on Monday's #BoldandBeautiful!
Read the details below ⬇️⬇️⬇️⬇️https://t.co/0K7ugKlUJa

At any rate, look for Ridge to be appreciative of Shauna’s comfort and support, and he just might find himself starting to consider her to be a friend…something that might prove to be dangerous, especially if Brooke ever finds out just how much he and Shauna have been talking.