The Young and the Restless spoilers for Friday, June 28, tease that Billy Abbott (Jason Thompson) will reel from seeing Chloe Mitchell (Elizabeth Hendrickson) at Delia Abbott’s (Sophie Pollono) gravesite. Chloe will ask Billy for his help and divulge that she was the one who shot Adam Newman (Mark Grossman).

Chloe will also reveal that Adam let her go because of Kevin Fisher (Greg Rikaart), and that she suspects that Adam is using Kevin to do his bidding. Billy will agree to make sure that Kevin comes home to her without going after Adam himself.

Next on Y&R, at Devon Hamilton’s (Bryton James) penthouse, Nate Hastings (Sean Dominic) and Ana Hamilton (Loren Lott) will confront Devon about his recent panic attack. Devon won’t be receptive to the conversation at first, but finally, he’ll admit that he keeps Hilary Hamilton’s (Mishael Morgan) GC Buzz DVDs so he can see and hear her.

Ana will remark that the memories of Hilary live within him, not in the DVDs and other things. She’ll urge him to clear a path with the strength that Hilary and Neil Winters (Kristoff St. John) gave him. Later, Devon will be in the process of boxing up the DVDs, when he stops and leaves.

Next on Y&R, Phyllis Summers (Michelle Stafford) and Sharon Newman (Sharon Case) will have a tense talk at Society about Phyllis’ new job at Dark Horse. Sharon will think that Phyllis stabbed Nick Newman (Joshua Morrow) in the back, but Phyllis will shrug it off. Phyllis will snark about Sharon and her relationship with Adam while she’s with Rey Rosales (Jordi Vilasuso).

Meanwhile, at Crimson Lights, Adam will meet up with Kevin, who will fork over the dirt on Nick – it’s the video of Nick removing his JT Hellstrom (Thad Luckinbill) mask. But Adam won’t want to let Kevin go, and he’ll threaten to tell Phyllis that Kevin is the one who kidnapped her unless he continues to help him. 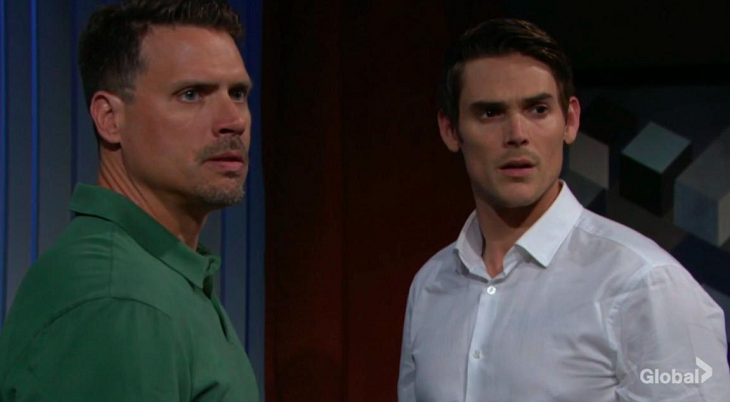 Adam and Nick will meet at Dark Horse, and Adam will show Nick the video of him taking off the JT mask. Adam will demand that Nick bring Christian Newman (Jamie and Alister Tobias) to his house tonight. Nick will refuse, and Adam will say he’ll use the video to prove that Nick is unstable. They’ll argue and almost beat blows when suddenly Chelsea Newman (Melissa Claire Egan) will rush in and shout at them to stop.

Y&R Spoilers– Billy Has A Gun

Next on Y&R, Sharon and Rey will talk, and Rey will reveal that he has to go back to Las Vegas. Sharon will put two and two together and realize that it has to do with Adam. Ultimately, Sharon will decide that she’ll go with Rey.

Meanwhile, Kevin will join Chloe at Delia’s gravesite, and he’ll assure her that everything will work out.

Finally, on Friday’s new episode of Y&R, Billy will return home to the Abbott estate and unearth a gun.

Days of Our Lives Spoilers, Friday, June 28: Ben Opens Up To Marlena — Ciara And Tripp’s Plot To Trap Claire Hits A Snag