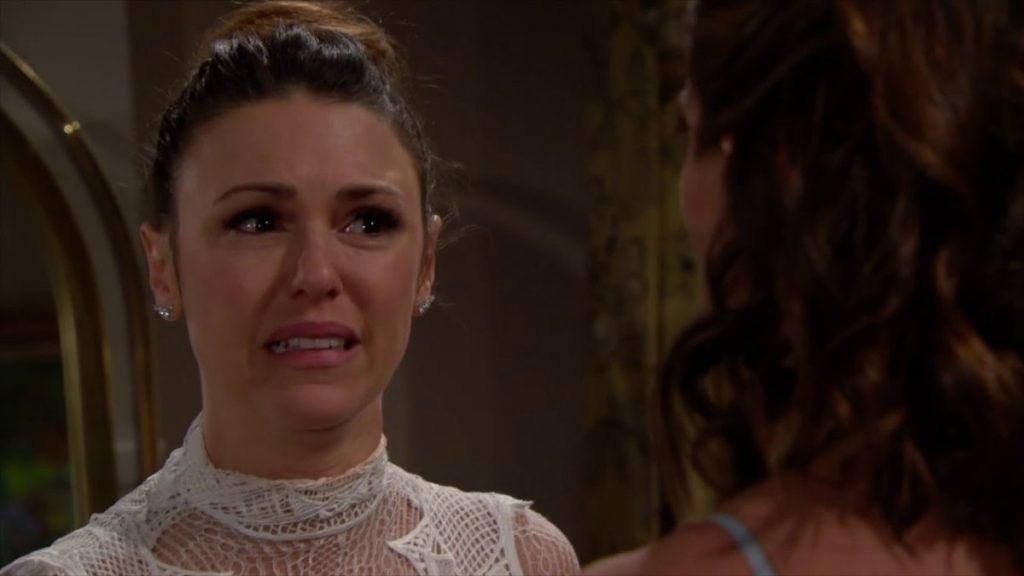 Khloe had been living clandestinely on the left coast of the United States since 2017, when Chloe faked her own death. She orchestrated that ruse in order to avoid arrest and imprisonment for supposedly ending Adam’s (as then played by Justin Hartley) life. Kevin learned of the scheme shortly thereafter in a memorable scene where a casket opened and he fainted.

When viewers last saw her, Chloe was at Delia Abbott’s (Sophie Pollono) grave site. Billy was naturally shocked to see Chloe there when he arrived. That specific encounter is what pushed him over the edge. Since then he’s been reeling, convincing himself that Chilly’s daughter, who Adam (as then played by Michael Muhney) is believed to have accidentally killed in an unaware hit and run, is calling to him from Heaven.

Chloe’s arrest, via Rey Rosales (Jordi Vilasuso), reveals that Mitchell’s character is alive. This will surely spark more tense scenes between Delia’s mother and Adam, who recently agreed to release Chloe from an area where he was holding her in exchange for Kevin’s digital dexterity.

Michael’s special election victory, where he ran unopposed due to pressure Adam applied on other potential candidates, makes him GC’s District Attorney. Attorney Baldwin’s return to the post he once held now puts him in the precarious position of applying justice to Chloe and also to Kevin.

Young and the Restless #YR Spoilers Friday August 23: Victor Warns Michael, An Arrest Is Made, and Chelsea Forms A Friendship with Sharon @celebratesoaps https://t.co/6YcGSuabdC

Y&R fans knew the instant that the Adam role was recast that Mitchell would likely be rejoining the cast, which she then did. Chloe’s spring return was needed, as her hand held the gun that missed the mark on Adam at the tack house.

Just when Michael believed that he was working a longterm plan to end Adam’s hold over him, DA Baldwin now finds himself with another family mess. Of course, Kevin is linked to the problem’s center.

As for Billy, his overwrought mind has increasingly pushed him toward what feels like an inevitable clash with Adam, unless Thompson’s character proves so reckless that he sabotages himself in the meantime. This is why Chloe’s reappearance is telling, as she will serve as some type of distraction, or additional emotional fuel toward the aim of getting Adam once and for all.